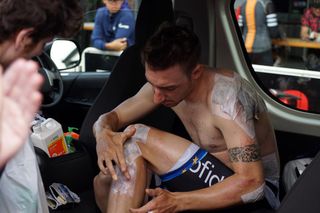 Elia Viviani before stage 3 of the Tour Down Under (Image credit: Cycllingnews)

Elia Viviani (Cofidis) is fighting to return to fitness to try and salvage something from his early season trip to Australia, having suffered a heavy crash during last week’s Tour Down Under.

The Italian fell heavily with around 30km to go on stage 2 of the six-stage race, suffering abrasions and a blow to his left knee. He went on to finish the remaining three stages but was well below his best.

Viviani has since been resting up to try and recover for Thursday’s Race Torquay and Sunday’s Cadel Evans Great Ocean Road Race.

"I'm just happy to finish the race and still be on the bike," Viviani told reporters in the wake of the Tour Down Under.

"I came here to win a stage but after the crash I was far from 100 per cent and raced in pain. I tried to sprint but on stage 4 I wasn't able to produce and then on stage 5 I was dropped on the late climb, when normally I'd be up there."

Viviani is set to line up at the Race Torquay on Thursday, ahead of the Cadel Evans race, which he won last year after finishing runner-up in 2018. Though painful, the cuts won’t affect his output on the bike, but his left leg was left weaker by the crash.

"I haven't checked my data but I think we crashed at about 50km/h, so it was fast. Afterwards I felt straight in the saddle but I seemed to be pushing with my right leg and not much with my left leg. I need to straighten myself out for the Cadel Evans race," Viviani said.

"I have to accept what happened, recover as much as possible and try to be at my best. I've finished second and first in the last two years, so it's a good race for me. I just hope to be 100 per cent. In modern – and even probably in old – cycling, if you're not 100 per cent, you can't usually fight for victory. I need to be 100 per cent if I want to take home a win from Australia."

The trip to Australia is just one chapter in what is a packed season for Viviani, who’s aiming to combine sprint victories at his new team, Cofidis, with success on the track.

The reigning Olympic Omnium champion will be out to defend his title in Tokyo in August, and will also break up his road campaign – which includes the Spring Classics, Giro d’Italia, and Tour de France – to race the Track World Championships at the end of February.

Despite the busy schedule, Viviani has moved swiftly to replace the gap in his calendar left by the cancellation of the Tour of Oman, and will instead head to the Volta ao Algarve in mid-February.

"I was due to ride the Tour of Oman but after it was cancelled, and we've been assured a place at the Volta ao Algarve and so I'm going to ride it. It's a nice block for the Worlds and the spring Classics. I've got two week at home after I get back from the Cadel Evans race, then I've got Algarve, Track Worlds and Tirreno-Adriatico," Viviani said.

"The Tour de France and the Omnium on the track at the Tokyo Olympics are the big, big goal for me but I've also got others such as Milan-San Remo, Gent-Wevelgem and even the Tour de Flanders, where I want to test my limits in that race.

"My season will be in two parts, first up to the track Worlds, then the Tour and the Olympics. I'll also ride Giro d'Italia. I had the Tour of California in my original plans but it'll be nice to go back to the Giro again. I wasn't 100 per cent last year in the Giro and might not be this year but I'll be back."

It is highly unlikely Viviani will finish the Giro d’Italia, given the almost-exclusively mountainous nature of the final week, and given he plans to finish the Tour in a bid to hone his form for Tokyo.

"It's possible to do both the Tour and the Olympics," he said. "I'm fortunate that the track racing comes later during the Games. It's hard for the road racers, who have just six days to get to Tokyo but the Omnium comes 18 days after the final stage of the Tour de France in Paris, so I have time to recover and take my form over to the track.

"I'm optimistic about my plans because I'm always on good form after finishing a Grand Tour, I'm always flying. That gives me moral for Tokyo."