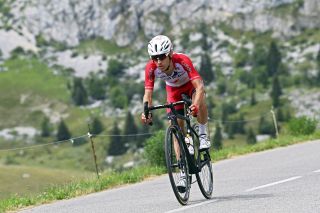 Cofidis are again on the hunt for their first Tour de France stage victory since 2008, when Sylvain Chavanel won stage 19 in Montluçon. In climber Guillaume Martin and sprinter Elia Viviani, they have a better chance than ever to break their dry spell at La Grande Boucle.

Viviani and Martin were named on Monday alongside Jésus Herrada, Nicolas Edet, Anthony Pérez, Pierre-Luc Périchon, Christophe Laporte and Simone Consonni for the French WorldTour team's eight-rider squad for the Tour, which begins in Nice on Saturday.

Martin's so-far excellent 2020 season has seen the Frenchman finish third at the Mont Ventoux Dénivelé Challenge at the start of August, and then back that result up by being able to stay with the world's best climbers at the Tour de l'Ain and the Critérium du Dauphiné, with the 27-year-old finishing third overall at the latter.

It means that Martin has been handed the responsibility of leading the team's general-classification hopes this year, and the chances of him improving upon his 12th overall position at the 2019 Tour – and possibly cracking the top 10, or even top five – are high.

"I'm very excited about taking part in what will be my fourth Tour de France," Martin said in a team press release, having taken part for the past three seasons. "It's certainly going to be a special race, as for a long time no one even thought that it could happen.

"It's a relief to be heading there as part of such a tight-knit group, and, thanks to my good performances through August, I'm going there full of confidence and ambition," he said. "The main objective is to aim for a stage victory and, depending on the scenario, to try to secure a high overall finish."

Martin will have Herrada, Edet, Pérez and Périchon at his disposal to try to achieve such goals, while Viviani will be able to count on Consonni and Laporte, in particular, for the sprints.

Laporte is a prolific bunch-sprint winner in his own right, but will be there to happily support Viviani in his quest for at least one more stage win to add to his first last year – on stage 4 in Nancy, when he was still with Deceuninck-QuickStep.

"It's always a proud moment for a rider to be selected for the Tour de France – the most prestigious race in our sport. It means that you're among the best riders in the world," said Viviani, who will have to give up his European road race champion's jersey on Wednesday, as the Italian won't defend his title Plouay as he instead concentrates on being ready for Saturday's opening stage of the Tour.

"It's an honour for me to be a team leader alongside Guillaume Martin," the 31-year-old continued. "There is bound to be a lot of emotion in wearing the jersey of a French team. Raising my arms in the Cofidis jersey is my main objective at what will be my third Tour de France."