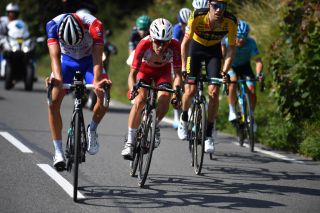 Guillaume Martin (Cofidis) made yet another huge step towards a hoped-for top-10 finish at this year's rescheduled Tour de France by finishing third overall at the Critérium du Dauphiné on Sunday behind winner Dani Martiniez (EF Pro Cycling) and Groupama-FDJ's Thibaut Pinot.

Martin has enjoyed an excellent 2020 racing season so far, and since professional cycling's restart after its shutdown due to the coronavirus, in particular. The Frenchman took third place at the Mont Ventoux Dénivelé Challenge in early August, followed by fourth place on the final stage of the Tour de l'Ain, behind Primoz Roglic (Jumbo-Visma), Egan Bernal (Team Ineos) and Nairo Quintana (Arkéa-Samsic).

Since then, 2019 Tour de France winner Bernal pulled out of the Dauphiné ahead of stage 4 on Saturday, Quintana quit on stage 5 complaining of knee pain, and overnight leader Roglic was a non-starter of stage 5 due to injuries sustained in a crash the day before. It meant that following his consistent climbing over the previous days, Martin went into the final stage of the Dauphiné on Sunday in second place overall, just 10 seconds down on new race leader Thibaut Pinot (Groupama-FDJ).

While Colombian climber Martinez was able to overhaul his deficit to Pinot and leapfrog both him and Martin to take the overall title, Martin kept pace with Pinot over the final stages of Sunday's race around Megève, eventually finishing third overall, 41 seconds down on Martinez and 12 seconds behind Pinot.

"At the start of the stage, I was taken by surprise by the group that got away, but my teammates did a lot of work to help me get back," Martin said on his team's website, referring to an early breakaway that included Pinot and Mikel Landa (Bahrain McLaren).

"Later, I wasn't feeling that confident when Tadej Pogacar [UAE Team Emirates] and Martinez attacked," he admitted. "It was a complicated situation, and I was at my limit, already tired from the efforts I'd made since the start of the race, plus we didn't have much information about what was happening up ahead.

"But, of course, as soon as I crossed the finish line, I was extremely satisfied. It was a huge achievement for the team, as my teammates have worked so hard for me all week," said Martin, who heads to the Tour de France at the end of this month hoping to break into the top 10 following 12th place overall at last year's race.

Cofidis team manager Cédric Vasseur added: "It was a huge achievement. This Critérium du Dauphiné was hotly contested from start to finish, and we saw that everyone taking part was clearly giving it everything. So we're extremely satisfied with Guillaume's performance, and with the effort of the team, which has been at his service all week.

"Guillaume has shown that he's capable of competing with the best riders in the world, and these are the beginnings of a big, beautiful adventure," said Vasseur.