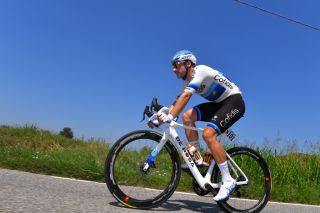 The current European road race champion, Elia Viviani, will not be permitted by his Cofidis trade team to ride for the Italian national squad to attempt to defend his title in Plouay, France, on August 26. The sprinter will instead remain in his team's 'bubble' preparing for the start of the Tour de France in Nice on August 29.

The rescheduled UEC Road European Championships elite men's road race takes place just three days before the start of the Tour, although the decision is less about its proximity and more about ensuring that the French WorldTour team's riders stay as safe as possible from the risk of the coronavirus in the countdown to the start of La Grande Boucle.

"Following the decision by Cofidis, I will not be able to be at the start of the next European Road Championships and defend my jersey," Viviani wrote in a social-media post on Tuesday.

"I'm sorry, but I respect the choice of my team, which first of all cares about our health, and about preserving it in view of the Tour de France," the Italian said.

"It's a major decision, but we don't want to take any risks," said Cofidis manager Cédric Vasseur, according to Het Nieuwsblad. "The Cofidis riders have to stay in their bubble. It is forbidden for our riders and staff members to change environments in the run-up to the Tour.

"We have regularly been testing our employees [for COVID-19] since the resumption of the competition," he said. "All this to prevent infections. Our priority is to ensure the health of the riders and to make the cycling season run as smoothly as possible."

The European Championships – which take place in Plouay from August 24-28 – had originally been due to take place in Trento in mid-September, but in May the Italian city postponed its hosting of the event until 2021 due to the impact of the coronavirus pandemic.

Following the decision of @TeamCOFIDIS, I will not be able to be at the start of the next European Road Championship and defend my jersey. I'm sorry but I respect the choice of my team, which first of all cares about the health of us and to preserve it in view of @LeTour. pic.twitter.com/vV2pCkjovJAugust 18, 2020