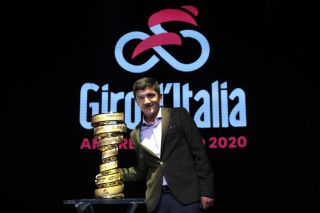 Richard Carapaz was in attendance at the 2020 Giro d’Italia route presentation held in Milan on Thursday. The defending champion sat on stage and watched as event organisers revealed a route that showcases a brutally mountainous third week and said that he hoped to be on the May 9 start line in Budapest to defend his title.

"I really hope to be at the start of the Giro next year," Carapaz said. "It is a very interesting route with stages that present many surprises. In the last week, there are a lot of mountains, the Stelvio could be decisive, I really hope to be there."

The 103rd edition of the Giro d’Italia will begin in Budapest on May 9, and after a mountainous third week, will conclude in Milan’s Piazza del Duomo on May 31. The opening three stages - Grande Partenza - will take place in Hungary, followed by three stages in Sicily before arriving to the main land on stage 7.

There will be three individual time trials, one held during each week of the Grand Tour; 8.6km on stage 1 in Budapest, 33.7km on stage 14 from Conegliano to Valdobbiandene, and 16.5km on stage 21 in Milan.

"Last year there was a decent amount of time trials and this year there's a slightly longer time trial before the mountains, that suits the specialists," Carapaz said. "But there are a lot of mountains and stages afterwards, where a climber can make a difference."

The most decisive moments of the Giro d’Italia will be in the third week where there are five stages at over 200km each that include a series of high-mountain passes including Monte Bondone, Passo dello Stelvio, Colle dell'Agnello, Col d'Izoard in France, and mountain finishes at Piancavallo, Madonna di Campiglio, at Laghi di Cancano above Bormio, and to Sestriere.

"It seems a very interesting Giro early on, there are stages near the coast which will perhaps spark some surprises, I think it'll be an interesting race," Carapaz said. "There are lots of climbs, including the Stelvio, which I think will be decisive, plus all the others."

Asked if the stage 20 to Sestriere would be one suited for him to win, Carapaz said, "For sure it's an important stage. We’ll decide if I ride the Giro and then for sure we'll study the route in great detail."

In the 2019 edition of the Giro d’Italia, Carapaz secured the maglia rosa after claiming stage victory at Courmayeur and went on to win the overall title ahead of Vincenzo Nibali and Primoz Roglic. He spoke of how much that overall victory meant to him in a press release from RCS Sport.

"The 2019 Giro d’Italia will always be a very important moment in my history as a pro rider, just thinking about it excites me," Carapaz said. "I owe so much to my parents and to all the people who helped me become the rider I am today. I will never stop telling the kids in Ecuador who start cycling how important it is to pursue their dreams."

Team Ineos have not yet announced what riders will be racing in each Grand Tour. Froome is recovering from a devastating crash at the Critérium du Dauphiné in June but is hoping to line up at the Tour de France next July where he could secure a fifth title. Likewise, it has been reported that Bernal will be aiming to compete in the Tour.

It has been reported that Thomas is considering racing the Giro d’Italia in May. Asked what the tactics would be should both Thomas and Carapaz line up to compete in the Italian Grand Tour, Carapaz reiterated that Team Ineos haven’t discussed plans for next season's Grand Tours yet.

"We haven’t talked much yet about these things but I think the best riders have to ride the biggest races like the Giro, Tour and Vuelta, and we've got the riders to do that," he said. "The team will decided on a good stage for all of us."