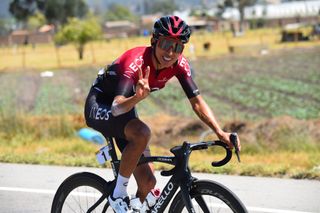 Egan Bernal (Team Ineos) has explained why he opted not to target the Giro d’Italia - Tour de France double in 2020, hinting the Italian Grand Tour could figure in his plans for 2021.

Bernal was due to tackle the Giro d'Italia in 2019 but crashed in training a few weeks before and so changed his focus to the Tour de France, which he then won.

As for doing both Giro and Tour in 2020, in a lengthy interview published in Spanish daily El País on Monday, Bernal explained that "we thought about it, but we saw straightaway that this wasn’t the best year.

"Firstly, because I’m 23 and I’ve never done two Grand Tours in the same year. And obviously, if I go to the Giro after winning the Tour, the least people would expect is that I do well, which means winning it or getting on the podium.

"Then I’d have to go to the Tour to defend that title. On top of that, there’s a week less between the two than there was in 2019 and after the Tour last year I was exhausted."

Bernal said that he was a massive fan of the Giro, having lived in Italy for two years early in his European career, and was keen to race it this year.

"But I understand the team. The best decision is to focus on the Tour. The Giro [would be] for the year after," he said.

Surprisingly, despite his youth, Bernal also told El País he no longer felt as if he was part of that new wave of young riders coming through.

Tadej Pogacar (UAE Team Emirates) has recently won the Volta a la Comunitat Valenciana, whilst Remco Evenepoel (Deceuninck-Quick Step) has conquered the Vuelta a San Juan in Argentina. Pogacar turned 21 in September, while Evenepoel was 20 on January 25.

"I’m not old, but Remco is 20, Pogacar is also very young and how many stages has he won? He’s impressive. I’m 23, I’m aware that I’m young, but sometimes I do feel excluded [from that generation]," Bernal claimed.

As for the almost inevitable question of leadership in the Tour de France and how Bernal would cope with such a crowded house of top contenders inside Team Ineos, the Colombian said there was little point in getting overly troubled by it.

Team Inoes have named Bernal and Geraint Thomas as joint team leaders for July, with Chris Froome also expected to be in the team if he makes a rapid and full recovery to form after his crash at last year's Critérium du Dauphiné.

"It’s complicated," Bernal said about team leadership, refusing to get caught up in a psychological battle for the role of top dog.

"Sitting here talking, it’s very easy to say ‘No, there won’t be any problems, everything is going to be fine, blah, blah, blah', and then maybe things get complicated out there on the road. But right now it doesn’t make sense to be chewing over this question constantly.

"Regarding these questions, Dave [Brailsford] is very, very intelligent; he knows how to organise things so we all go to the Tour feeling happy. We talk things through with him, he’s the one who decides. He makes you think, and he makes me think that I’m going to have the support of the team.

"That’s what matters to me the most right now - feeling that Dave gives me his word that I'm going to have the support of the team. For sure, he will also say that to Thomas and he'll say it to Froome, but once we're in the Tour, it's relatively easy to find an understanding. You go so flat out at the Tour, that if someone is stronger than the other, it'll be clear, and the team is going to have to take a decision because they're not going to let the Tour slip away."