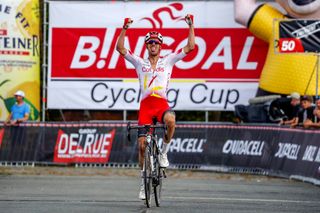 The Pro Series race Dwars door het Hageland has been rescheduled for Saturday, August 15, according to Wielerflits.nl. The race was originally scheduled for June 17 but was postponed due to the coronavirus pandemic.

The new date is on the weekend left vacant on the UCI's revised 2020 road calendar by the cancellation of the RideLondon Surrey Classic, which was due to take place on August 16, and the women's Prudential RideLondon Classique on August 15.

The Dwars door het Hageland is part of the Bingoal Cycling Cup, which started with the GP Monseré this year, won by Deceuninck-QuickStep's Fabio Jakobsen. Other races in the series include the Circuit de Wallonie, the GP Marcel Kint, Halle-Ingooigem, Schaal Sels, the Kampioenschap van Vlaanderen and the Memorial Rik van Steenbergen, all of which have been cancelled or postponed.

Organiser Nick Nuyens was hoping to bundle the Dwars door het Hageland with Schaal Sels, the Kampioenschap van Vlaanderen and the Memorial Rik van Steenbergen into a stage race, telling Sporza earlier this month that the four races could be run at the national level.

He hoped to provide a platform for Pro Continental teams and Continental teams to race as the UCI sought to first fill the calendar with the WorldTour and Pro Series events. It appears those plans will not include the Bingoal series' only 1.Pro event.

By moving to August 15, the race is now the first Belgian Pro Series event of the revised calendar.