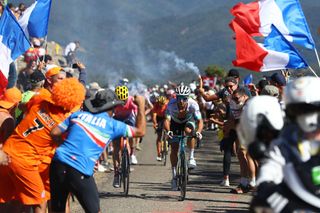 The issue of the coronavirus pandemic has quietened since the Tour de France set of from Nice on Saturday, but concerns have surfaced after Thursday's stage 6, with riders complaining about mask-less fans on the road side.

The Col de la Lusette was the main attraction for spectators on Thursday, with fans most notably gathering on the switchbacks on the steepest section of the climb around 5km from the top.

As is always the case with fans who have ventured up a mountain to watch the Tour, many were keen to voice their encouragement to the riders, which didn't go down well with some.

"I am happy with all the cheerful people along the route, but on such a climb it is still a risk," said Jumbo-Visma's Tom Dumoulin, according to Dutch newspaper AD.

"I saw more people today than in the past few days. Especially in the last kilometers, I didn't like it - there were a lot of enthusiastic spectators without a mask.

"If I have to believe the virologists, the chance of infection is low during a cycling race, but that does not mean that it is safe. One spectator only needs to have corona and cough, and a rider picks it up."

Race organiser ASO has attempted to reduce the number of fans on climbs by preventing access to cars and campervans, but spectators are still able to walk up.

It is also running an information campaign, including via the Tour caravan, that encourages fans to wear masks and keep their distance from riders. Police are in charge with enforcing regulations but mask wearing is only obligatory in certtain parts of France where infection rates are highest.

Thomas De Gendt (Lotto Soudal) was another rider who took issue with the number of fans on Thursday, calling the conditions 'unsafe'.

"The spectators can't give you a push this year either, although I thought there were a lot of people on the cols without a mask," he said in a column for Het Nieuwsblad.

"At the finish everything is closed, but that is for show. Even though people keep their distance, it is not safe. I smelled the beer smell from someone's mouth, so if they are infected with the coronavirus, the riders riding next to them can also get infected."

Elsewhere, on social media, Matteo Trentin made a public appeal, writing: "Dear fans/spectators please wear a mask when you come to see us on the side of the road! The safer we can make the race environment the better for all of us! #please"

It is unclear whether Dumoulin, De Gendt, and Trentin have taken their concerns to the CPA, the union that represents pro riders. Earlier this month, Nicolas Roche and Team Sunweb did so after encountering a similar problem at the Critérium du Dauphiné, another ASO race.

"It's important to bring all of the problems up today so that they can be slightly corrected before the Tour," Roche had said.