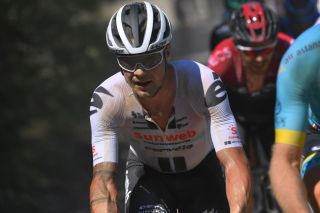 As well as taking issue with the descent of the Col de Plan Bois, Team Sunweb riders have voiced concerns about the amount of fans not wearing masks on the roads of the Critérium du Dauphiné.

The Dauphiné, a key preparation race for both riders and organisers ASO ahead of the Tour de France, was taking place with strict COVID-19 restrictions, but while the start and finish areas were closed to the public, fans still lined some of the key climbs.

Sunweb's Nicolas Roche was one of a number of riders who asked for the opening 10 kilometres of the final stage to be neutralised in protest at the Col de Plan Bois descent on the previous stage, which was branded "a disgrace" by Jumbo-Visma's Tom Dumoulin and "disrespectful to the riders" by André Greipel (Israel Start-Up Nation).

Speaking prior to the stage, Roche said he and his teammates had voiced concern over mask-less fans as well as the controversial descent as soon as they returned to their bus at the end of the penultimate stage.

"The first thing I did when I got to the bus was to send a message to the CPA [the riders' association] from the team, who had a few issues to bring up. One of them was the descent, the other was masks on the side of the road," said the veteran Irish rider.

"We didn't feel that many people actually had them. It's been great around the start and finish areas, where people have been mainly in masks, but when we've been on the climbs, most people haven't had masks. We did a full report yesterday that we transmitted to the CPA."

Roche added that he believed it was important to highlight these issues to race organiser ASO because the Dauphiné is being used as a test event for health-related procedures that will be put in place at the Tour de France later this month.

"It's important to bring all of the problems up today so that they can be slightly corrected before the Tour," he explained.

The protest at the Col de Plan Bois descent had the full backing of the CPA, which released a statement saying: "The riders want to send a clear signal of protest to both the organizers and to the UCI referring to the serious crashes and accidents that have occurred in the recent races, asking for greater attention to their safety."

Roche added that he "didn't feel that there was much that could be done by shouting and screaming on social media because that made been done by Greipel and others already and it was easier to go directly to the CPA than go on Instagram. But this morning I brought up the issue of this descent at the start, which I don't think was a disgrace, but added an extra and unnecessary risk to what's already a dangerous sport."

The CPA has been widely criticised in recent seasons for its lack of effectiveness in a number of areas, including rider safety, and Roche affirmed that there is a feeling among riders that it should be doing more.

"This is an eternal battle, isn't it? We have an organisation in place that should protect us, but it's actually severely criticised for not protecting us enough.

"At the end of the day, they're also limited by rules as to what they can do. It's not a revolutionary party; it is trying to change things," said Roche.

He added: "Sometimes it's about having the right people in place. I don't want to go too much into politics, but I think they try to do what they can, but sometimes we feel that more should be done."