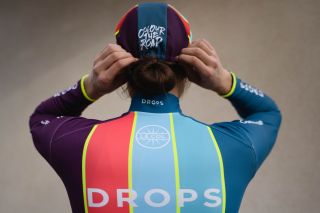 Drops Cycling Team announced Monday that they have partnered with Women’s Sports Group to secure new sponsorship funding that will allow the team to apply for a three-year Women's WorldTeam licence beginning in 2021.

"The Women’s Sports Group are actively helping us to secure the necessary funding to apply for a three-year World Tour licence from 2021; with the requirement for minimum salaries, maternity rights, medical support and full-time staff," team director Bob Varney told Cyclingnews.

Printing business owners Bob and Tom Varney launched Drops Cycling Team in 2016 and they have been one of the most successful development programmes in women's cycling, not only for British talent, but also bringing in riders from 13 nations.

They now want to take the team up a notch to the new top-tier of women's cycling - WorldTeam. Moving up from Continental to WorldTeam status comes with increased financial requirements. The sport's governing body, the UCI, initially stipulated a four-year sponsorship guarantee, along with a minimum salary of €15,000 (employed) or €24,600 (self-employed), along with social insurances and benefits such as maternity leave.

"Tom and I have taken our project as far as we can, so we are now offering full title sponsorship and branding rights to drive our programme on to the next level - the UCI Women’s World Tour. We embrace the requirement for minimum salaries, maternity rights, medical support and full-time staff, and are embarrassed that we have been unable to provide these thus far," Varney said in a press release last month.

Over the next three years, the UCI is aiming to gradually increase the number of Women's WorldTeams to 15 teams and the minimum salary requirements to equal the men's Professional Continental, which is currently set at €30,855.

"The minimum funding required for a women’s world tour licence is €1 million per year, secured on a three year contract with an ethical and financially established sponsor/s.  Management of an international activation campaign can be provided along with a guaranteed televised global race programme," Bob Varney said in a press release.

Drops Cycling acknowledged that their biggest challenge is stepping up to the Women's WorldTeam licence is financial and that they have appointed Women’s Sports Group to help secure the necessary funding.

"Drops has worked consistently to improve women’s cycling since being launched and there is huge potential for the team to grow competitively and commercially. It has struck a chord with fans and has already established itself as one of women’s cycling most recognisable teams," Rabbatts said.

"Women’s cycling is one of the fastest growing sports driven by not only an increasing global participation base but by increased global media exposure. We look forward to working alongside Drops to secure new investment for the team."

This season has been particularly hard on businesses, sponsors and teams due to the impacts of the COVID-19 coronavirus. After a five-month shutdown, racing officially re-started at the end of July and under strict UCI health guidelines and protocols. Varney noted that the initial cost estimates of testing staff and riders for the virus ahead of events is €25,000 for the remainder of the season.

"To help cover some of these extra costs we have launched a Team Issue Supporters Pack for sale in the shop section of this site. All proceeds will go to keep the team safe and racing during these unprecedented times," the team stated in a press release.

While the sport was halted due to COVID-19 health precautions, April Tacey won two stages of the Virtual Tour de France.

Now that the season has re-started, Drops Cycling Team will next focus on National Championships in the Netherlands, Norway and Sweden later this month, followed by the Tour d'Ardeche in France. They will then have several one day races in Belgium and Northern France in preparation for the revised Classics campaign in October.