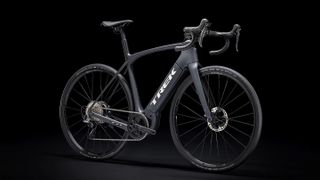 Trek has partnered with Bosch to deliver impressive range for its new Domane+ HP.

For those riders who wish to tally enormous mileages in a day, the presence of a sophisticated carbon road bike frame with battery assistance is the enabler.

With the Domane+ HP, Trek has not attempted to design a road e-bike with unobtrusive lines and stealth battery integration. In terms of appearance, the Domane+ HP can clearly be identified as an e-road bike, with the battery housing and motor packaging clearly influencing its frame dimensions.

The goal of its Domane+ HP is to allow the longest possible duration of battery assistance and that means an energy-dense battery.

Providing the Domane+ HP’s pedalling assistance is a 500Wh battery which produces 75Nm of output. Trek claims the Domane+ HP should have enough endurance to help you along on rides up to 150-miles when running a supplemented bolt-on battery pack.

The battery pack, motor and integration electronics are all sourced from Bosch which has enabled Trek to offer a range of special features. LED daytime running lights are mounted on the stem and along the seat rails, to ensure you have integrated night-time and low-light safety lighting, without the hassle of having to fit and fiddle with aftermarket lights.

Bosch also supplies its Kiox head unit, which offers power system display and management. For peace of mind, this Kiox technology can also lock the drivetrain, to prevent bike theft.

Trek’s engineers recognised that the additional weight of an e-road bike requires stronger disc brakes for consistent performance. As such, the Domane+ HP uses Shimano’s GRX gravel bike hydraulic brakes, with 160mm rotors at each axle.