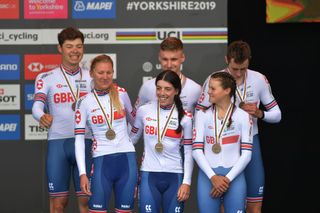 In a post on Instagram, the 20-year-old British rider described the circumstances that lead to the crash in her home county of Devon last week.

"After returning back home to Devon, I was back training on home roads with my father on Tuesday," Dolan wrote. "Nearing the end of the ride, we encountered a frustrated driver, beeping on his horn behind us whilst riding single file. The man wasn’t able to pass immediately due to oncoming traffic on the other side of the road.

"To seemingly display his frustration/anger for the hold up, he passed us with inches to spare. As soon as the driver was directly in front of us at 45kph on a descent and with feet to spare the driver slammed his breaks on. I’ve learnt since that the police have a phrase for it - 'punishment braking'," Dolan wrote.
⁣
"Having nowhere to go I tried to squeeze down the outside of the car between a traffic island and the car with my front wheel centimeters from the car. Needless to say my back wheel just clipped the island throwing me over the top of the bike. The car sped off."

Dolan says she had to have surgery on her left shoulder, with a broken collarbone and substantial soft tissue damage among her injuries.

Dolan rode the second leg of the Worlds mixed relay with Anna Henderson and Joscelin Lowdon, following the first leg ridden by the GB trio of Dan Bigham, Harry Tanfield and John Archibald. She helped give the team an early lead in the competition, but they were later bettered first by Germany and then by the event winners from the Netherlands, but were happy to take what was somewhat of a surprise third place.

In her Instagram post about the crash, Dolan thanked her surgeon before returning to the topic of the malicious driver.

"This was a horrible act with malicious intent to harm a cyclist," she wrote. "The driver has been found but has denied his actions. Without camera footage or independent witnesses it’s going to be difficult to bring charges to the individual.⁣
⁣
"This type of behaviour is becoming all to familiar on our roads. It has become a culture that needs addressing and time for change is long overdue," Dolan concluded while promising to be back on the roads training again soon for 2020.