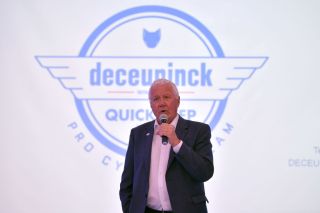 In his column for Het Nieuwsblad the Belgium team boss Patrick Lefevere has set out his concerns around the coronavirus, with worries over his Deceuninck-QuickStep staff testing positive for the virus and the effects on the sponsorship model should the Tour de France be canceled.

Lefevere has been a team manager for several decades and experienced virtually every scenario the sport has gone through but the global pandemic has created unprecedented times and made professional cycling seem inconsequential as governments lock down entire countries as they try and take the war to the coronavirus.

So far the virus has claimed over 11,000 lives. The hardest-hit country has been Italy with over 4,000 fatalities in just a matter of weeks.

Hospitals have been stretched beyond breaking point as the Italian health care system struggles to cope with the number of infected people, with Lombardy - the site of one of cycling’s most important races – hit the hardest. Lefevere has staff in that precise area and admits that he sits by his phone, dreading the news that may one day come.

"What I read worries me. Every day I am afraid that a rider or someone on the staff will call me to say that they have become ill. With Davide Bramati and Davide Ballerini, we have two people who live in Bergamo, the worst-hit city in Europe,” Lefevere wrote in his piece this weekend.

Lefevere is also concerned with the economic effects the virus will have on the sport. Races have been canceled throughout March, April, and May, with only faint hopes that competition will resume in June. However, UEFA’s European Championships – which were scheduled for June - have been postponed and there’s increasing concern that cycling’s marquee event – the Tour de France – could be canceled or moved to an alternative date later in the year. The fact is that while there is no shortage of speculation, no one really has hard answers at this point. It’s not inconceivable to imagine a scenario that involves no racing for the rest of the calendar year.

“I realize that in that big story, cycling is just a footnote, but I'm a cycling team manager, so I'm also worried. All companies that export see their turnover drop. And then savings are quickly made on marketing. It would be naive to think that the economic impact of the corona crisis does not translate to cycling.”

Closer to home and Lefevere is worried about the future of his own team, Deceuninck-QuickStep, with the Belgian squad typically aiming to peak around now for the Spring Classics.

“But the spring, the most important showcase for my team, is completely gone. At QuickStep, we have certainly built up historical credit, but Deceuninck only sponsors for the second year. We have won eighty-three races so far, so I hope they will think about that too. ”

Yet it’s the potential uncertainty over the Tour that worries Lefevere the most. July’s showpiece event can make or break a team’s season, with success there often acting as the main justification for sponsoring a team in the first place. Teams invest millions safe in the knowledge that they will be rewarded with exposure during the summer, and with several teams already under pressure to find sponsorship funds for 2021, the task only becomes harder.

“Then we are talking about a total disaster,” Lefevere says when pondering a scenario that sees the Tour canceled.

“But it would be downright stupid not to take this into account. My maxim is to always start from a best-case and a worst-case. In the first case we race again in June, in the worst case, the season is over. I may be a pessimist, but who would have dared to predict three weeks ago that half of Europe would suddenly be under house arrest? ”

“Organizer ASO can take a beating, the teams can't. If there is no Tour de France, the whole model of cycling can collapse. ”