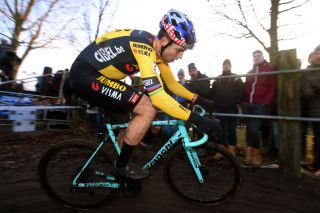 Many of Europe's cyclo-cross national championships titles will be decided across the weekend, with the elite women's and men's races at both the Dutch and Belgian events set to be particularly hard-fought, thanks to the depth of talent in the discipline that both nations enjoy.

Pauwels Sauzen-Bingoal pair Eli Iserbyt and Laurens Sweeck are considered two of the out-and-out favourites for the Belgian men's title, but the sentimental victory would come from Wout van Aert (Jumbo-Visma), who's only recently returned to the discipline – and to racing in any guise – following his horror crash in the stage 13 individual time trial at the Tour de France.

Defending champion Toon Aerts (Telenet Baloise Lions) perhaps also has a little too much ground to make up as he continues to recover from a back injury sustained in a crash in round 6 of the World Cup in Namur, Belgium, almost three weeks ago, while Michael Vanthourenhout (Pauwels Sauzen-Bingoal), Tim Merlier (Creafin-Fristads) and Tom Meussen (Group Hens-Maes Containers) can all expect to be in the mix.

Any of the mentioned riders could win, but now-retired two-time world champion Sven Nys has his favourites, having done a recce of the course in Antwerp.

"Before seeing the course, I would have said Sweeck was my top favourite, because at the moment no one is riding better than him in sand," Nys told Belgain website Sporza.be. "But now I've seen that there are a number of sections that Iserbyt, in particular, will enjoy.

"It's going to be tough," he continued. "It's a course for riders with big engines, so you have to consider Aerts and Van Aert, too, despite the fact that they're both coming back from injury."

In 2019, current women's world champion Sanne Cant (IKO-Crelan) took the 10th Belgian title of her career in a row, and will want to show that kind of form again ahead of defending her world title in Dübendorf, Switzerland, at the start of February. It'll be no foregone conclusion, however: 23-year-old Laura Verdonschot (Pauwels Sauzen-Bingoal) is only getting stronger, while five-time silver medallist Ellen Van Loy (Telenet Baloise Lions) will be out again to try to move a step up on the podium.

Van der Poel and Alvarado the big favourites in the Netherlands

With reigning Dutch champion, and world champion, Mathieu van der Poel (Alpecin-Fenix) set to be on the start line in Rucphen on Sunday, it's hard to look past him taking the national title once more.

However, lining up behind him to attempt to give it a go, should the 24-year-old falter, will be Lars van der Haar (Telenet Baloise Lions), Corne van Kessel (Tormans CX Team), or perhaps even Mathieu's older brother, and Alpecin teammate, David van der Poel.

Ceylin del Carmen Alvarado (Alpecin-Fenix) must start as the favourite in the women's race going on recent form, but 2019 champion Lucinda Brand (Telenet Baloise Lions) will hope to give the youngster a good run for her money in an attempt to defend her title.

CCC-Liv's seven-time 'cross world champion – and six-time national champion – Marianne Vos will be extremely dangerous as she continues her build-up to the Worlds in Switzerland ahead of the start of her road season, while 777's Yara Kastelijn will also be one to watch.

While national titles will also be decided in the likes of Britain, Germany and the Czech Republic across the weekend, AG2R La Mondiale's Clément Venturini will line up in Flamanville, on the Normandy coast, on Sunday, ready to defend his French elite men's title, which he also won back in 2017 – even if his focus has already switched to the road.

"Even though I no longer participate in the entire cyclo-cross season, I'm very attached to the French champion's jersey," the 2011 junior men's cyclo-cross world champion said on his team's website.

"For the second time in my career, I find myself at the start ready to defend my title. So far, my preparation has gone well," said 26-year-old Venturini, who joined AG2R from Cofidis in 2018. "I'm going to start with humility; I know the difficulty of one-day racing since anything can happen during an hour of competition.

"The French Championships will also serve as a test for my road season, which starts three weeks later at the Grand Prix de la Marseillaise [February 2] before heading to the Etoile de Bessèges [February 6-9]," he said.