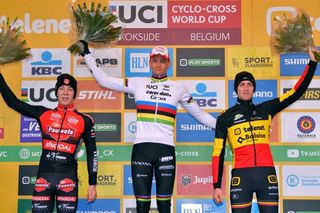 It was a double celebration for Corendon-Circus in Koksijde, Belgium, at round 5 of the UCI Cyclo-cross World Cup on Sunday as Mathieu van der Poel won the men's event and 21-year-old Ceylin del Carmen Alvarado won her first elite women's World Cup race.

Van der Poel extended his run of cyclo-cross wins to an astonishing 33, beating Pauwels Sauzen-Bingoal's Laurens Sweeck by 25 seconds and Belgian champion Toon Aerts (Telenet Baloise Lions) by 35 seconds, having had to make his way through a large part of the field from a lowly starting-grid position, having only started his World Cup campaign with round 4, which he won after similarly having to pass much of the field.

Van der Poel appeared not to have any hangover from having also won the previous day's Ambiancecross in Wachtebeke, Belgium, ahead of Tim Merlier (Creafin-Fristads) and Quentin Hermans (Telenet Baloise Lions), who finished ninth and fifth, respectively, at the Koksijde World Cup the next day.

Eli Iserbyt (Pauwels Sauzen-Bingoal) continues to lead the men's World Cup, despite what was somewhat of an off-day for the Belgian in the Koksijde sand on Sunday, where he finished 13th. It meant that Aerts' third-place finish closed the gap in the overall standings to just 18 points, with four rounds left to race.

Ceylin del Carmen Alvarado's victory in Koksijde, while not unexpected, announced the Dutch rider as a true contender for both the overall title and the World Championships in February. The current under-23 European champion beat Lucinda Brand (Telenet Baloise Lions) by just six seconds on Sunday, with 777's Yara Kastelijn – the elite European champion, and winner of Saturday's Ambiancecross – a further two seconds back.

Like Iserbyt in the men's race, the overall World Cup leader, Luna's Katerina Nash, finished well off the pace in 14th. Despite 'only' finishing 12th, Great Britain's Anna Kay (Experza Pro CX) has now moved up from fourth to second place overall, and trails Nash by what is still a good buffer of 40 points.

Alvarado's victory, meanwhile, on the back of two runner's-up spots in the previous rounds of the World Cup, after she missed the opening two rounds, moves her up to fourth in the overall standings, 48 points off Nash's lead, and only eight points behind 20-year-old Kay, whose overall lead in the under-23 standings is now also under real threat from Alvarado.