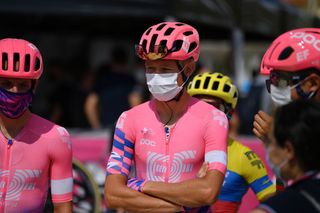 EF Pro Cycling announced on Tuesday that Magnus Cort Nielsen tested positive for COVID-19 after stage 7 of Tirreno-Adriatico, leading the team to enact their COVID-19 protocols.

The Danish rider did not start Monday's final time trial and instead drove himself home to Girona, Spain to quarantine. The team tested all riders and staff at Tirreno-Adriatico twice and all tests came back negative.

Cort is the second rider at the Italian WorldTour race to test positive for the SARS-CoV-2 virus. The CCC Team pulled Łukasz Wiśniowski from the race after having mild symptoms and then testing positive in a rapid test on Sunday evening.

Meanwhile, Trek-Segafredo announced that Italian Giulio Ciccone, who returned a positive COVID-19 test leading up to Tirreno-Adriatico, has been cleared to resume training after more than two weeks in isolation at home. The team said Ciccone is "clinically healed" from the disease after two negative tests on Monday and Tuesday.

"In addition, favorable feedback from clinical and instrumental tests that Ciccone underwent in the past days verify no consequences of the COVID-19 virus. All tests ruled out any pathological changes," the Trek-Segafredo team stated.

"At the moment, the team has no decision regarding his return to competition. In agreement with Ciccone and the team's medical staff, sports management will evaluate his physical and mental condition before communicating about future races."

Before the road season resumed in July, the UCI drew up an extensive guidance document for dealing with athletes who contract the coronavirus, which has led to the deaths of almost one million people around the world. The document recommends screening for cardiac issues for any riders who are positive for COVID-19 and have symptoms.

However, a recent Ohio State study showed that, while the majority of COVID-19 cases are mild or asymptomatic in young athletes, infection can lead to inflammation of the heart muscles called myocarditis. Researchers detected the condition in four of 26 COVID-19 positive athletes. Two of the athletes showing signs of myocarditis never displayed symptoms of the virus, while the other two had mild cases.

All riders are required to undergo testing before races, while the Tour de France required two tests of the entire team 'bubble' before the race began, and the same group underwent second and third rounds of tests on the two rest days. Two staff members from Lotto Soudal were sent home in the pre-race testing round, while four staff members from four different teams, as well as race director Christian Prudhomme, were forced to leave after testing positive on the first rest day. No positive tests came back on Monday's second rest day.