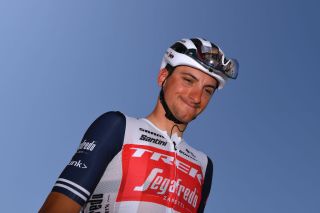 Trek-Segafredo announced Thursday that Giulio Ciccone has been removed from their roster for the upcoming Tirreno-Adriatico, set to start on September 7, after returning a positive test result for COVID-19 in a swab test taken on August 31.

The team confirmed that all teammates that were in contact with Ciccone at a recent training camp have tested negative for the virus.

"Trek-Segafredo confirms that its rider Giulio Ciccone has returned a positive COVID-19 test result," read a team statement. "The test was completed on August 31 in compliance with the UCI regulations prior to his participation at Tirreno-Adriatico. The Italian stage race was an important objective for Ciccone in his preparation for the Giro d'Italia."

Ciccone was scheduled to compete at Tirreno-Adriatico, held from September 7-14 with a team that includes overall contender Vincenzo Nibali along with Julien Bernard, Gianluca Brambilla, Koen De Kort, Antonio Nibali and Pieter Weening. The Italian was using the event as preparation for the Giro d’Italia, held from October 3-15.

Ciccone last competed at the Italian National Championships, where he placed 26th on August 23 and then joined his teammates at Trek-Segafredo at team camp to prepare for Tirreno-Adriatico.

The team confirmed that this was Ciccone's last contact with his teammates but that all riders and staff had followed strict social-distancing protocols while at camp, and that the rider tested negative for COVID-19 after a routine check.

"Ciccone's last contact with his Trek-Segafredo teammates was on the evening of the 23rd at a team camp dinner, during which, as per team policy, social distancing was maintained," Trek-Segafredo stated.

"Like all members present at the team camp and as further team policy dictates, Ciccone slept in a single room. As part of the team's internal COVID-19 protocol, all riders and staff present had swab tests upon arrival at the camp. All tests, including Ciccone's, were negative."

Despite the negative test, the team was in consultation with medical staff, and allowed Ciccone to return home after he cited symptoms of fatigue. In compliance with the UCI COVID-19 protocol, Ciccone underwent a second test on August 31 ahead of his expected participation at Tirreno-Adriatico. This test returned positive for COVID-19.

"Due to symptoms of fatigue expressed by Ciccone, the medical staff, despite the negative test performed for COVID-19, decided to allow the rider to return home where he could continue to train individually," Trek-Segafredo stated.

"On August 31, in compliance with UCI regulations prior to his participation at Tirreno-Adriatico, Ciccone returned a positive COVID-19 test. As a precautionary step, all the riders and staff at the camp Ciccone had previously attended were also tested that same day (August 31), with all delivering negative results."

Trek-Segafredo confirmed that a second COVID-19 is scheduled for team members on September 3 and that the team will provide maximum support to Ciccone while waiting for his full recovery.