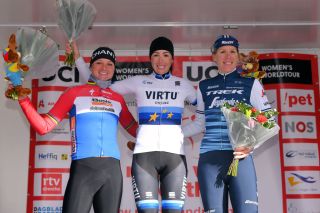 After the cancellation of the Strade Bianche due to be held on Saturday 7 March, attention turns to the next Women's WorldTour race in the calendar, the Ronde van Drenthe.

The Netherlands has not had anywhere near the same level of Covid-19 outbreaks as Italy, but with several men's and women's teams withdrawing from all racing for much of March of their own accord, it was not a matter of course that the race would go ahead.

Contacted by Cyclingnews for clarification, the race organisation confirmed that the Ronde van Drenthe was not under threat of cancellation.

"Unless there are dramatic developments in the next week, the race will be held," said race secretary Huub van Issum. "Three women's teams have cancelled their participation, Mitchelton-Scott, Movistar Team, and Rally Cycling, but apart from that everything will go as planned."

Those three teams have suspended their racing programmes until March 22, a period that includes the Ronde van Drenthe. The Netherlands is not a high-risk region, but as Mitchelton-Scott put it in their announcement, "constant travel will increase the health risks and make management of logistics, potential quarantine periods, etc. extremely difficult."

Some small changes had to be made to the Ronde van Drenthe race route. Due to their poor condition, some of the cobblestone sectors had to be removed from the race, leading to a new course length of 156.7 km including seven cobblestone sectors in the first half of the race followed by three laps around the VAM-berg. Unlike previous years, the final 40 kilometres will not feature any cobblestone sectors, which may give sprinters an edge over attackers.

The Ronde van Drenthe Women's WorldTour race, which this year commemorates the 75th anniversary of the Netherlands' liberation at the end of World War II, will be held on Sunday 15 March, preceded by the 1.2 women's race Drentse Acht van Westerveld on Friday, March 12 and the 1.1 men's edition of the Ronde van Drenthe on Saturday, March 14.