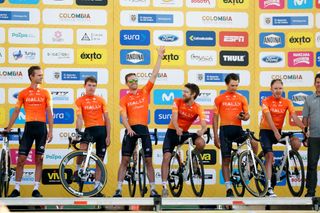 It may only be the virtual world, but Rally Cycling are throwing everything into their first Tour de France participation, and saw the fruits of their labour in a stage win from Matteo Dal-Cin on stage 3 of the virtual Grande Boucle.

While not on the start list for the real Tour de France, the absence of a couple of WorldTour squads from the virtual version opened the door for the US ProTeam to line up in the biggest online event so far.

Far from making up the numbers, they made every effort to ensure they’d be competitive, partnering with the Saris + The Pro’s Closet indoor racing team. In particular, they have drawn on the expertise of US national Zwift champion Holden Comeau, who earlier this year was the number-one ranked racer on Zwift.

Zwift PowerUps: What are they and when should you use them?

"We’d done a bit of Zwift racing earlier this year but when we found out we could particiapte in the virtual Tour de France, we got set up by Wahoo with their top-of-the-line trainer set-up for all the guys, and we brought in the guys from Saris + The Pro’s Closet, who were just like a wealth of knowledge," Dal-Cin told Cyclingnews after his win.

"They showed us how to have the best set-up so you have the least problems with internet, the best connectivity with the trainer, and all that stuff which I’m sure takes tons of time to fumble through on your own. We got a spreadsheet from them of all the boxes you have to tick, and everything has just worked super seamlessly.

"The team invested time and money into doing that and I’m happy we’re able to have it pay off."

It was the Saris + The Pro’s Closet team who provided the tactical blueprint for Dal-Cin’s victory. The new R.G.V route in Zwift’s new France world was only recently released but the specialists checked it out and figured out the keys to victory.

"They said that through the twisty section near the end, the drafting comes and goes, so stay up near the front," Dal-Cin explained. "I did so until 200-300 metres to go and used my power-up, because that’s how long they said it would last for. I sprinted with everything I had and looked up to see I was first."

As a result of Dal-Cin’s win, Rally Cycling now sit second overall in the virtual Tour de France, 37 points shy of leaders NTT Pro Cycling. With many big names, such as Elia Viviani, way out of contention on Saturday, Zwift racing is as much about know-how as it is watts-per-kilo, and Dal-Cin singled out Comeau as the driving force behind the team’s success so far.

"He’s been an invaluable resource. We were all pretty new to Zwift - only myself and a couple of the other Canadians who live up in the snow have dabbled in the winter. He basically talked us through all the tricks and tips he’s learned. I don’t think we’d be in with a fighting chance without him."

The Zwift racing has only left Dal-Cin and his Rally teammates itching to get back out into the real world. Racing is getting back underway this month, but the US team’s calendar is still up in the air, given they are waiting for confirmation of invites to certain races. The Volta a Portugal was due to be their first race back but has now been cancelled, and it doesn’t look like they’ll race before mid-August.

"Being home, we’ve had super consistent training, whether that be indoors or inside. I feel the form is good and definitely the motivation is through the roof to get back racing outside," Dal-Cin said.

"I’m just looking forward to if and when we can get back to a normal calendar, or something resembling normal again. I’m just excited to throw down and race my bike again."