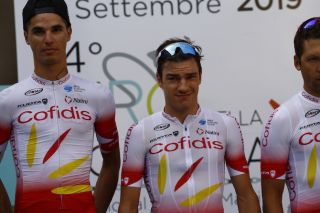 Cofidis stagiaires Attilio Viviani and Eddy Finé have both impressed team management sufficiently to earn themselves two-year contracts, starting next season, the French team has announced.

Both riders joined the squad as 'apprentices' at the start of August, with 22-year-old Viviani almost immediately repaying the faith put in him by sprinting to victory at Belgian one-day race Schaal Sels on August 25.

As the younger brother of Italian sprint star Elia Viviani – who will also join Cofidis next season after two years at Deceuninck-QuickStep – much will be expected of him in the years to come, but the younger Viviani said he'd soon felt at home.

"I'm really happy here on the team, and have settled in quickly and easily," Attilio Viviani said on the Cofidis website. "I'm trying to learn French, and am happy that I can already understand what's being said at the race briefings.

"I was given the opportunity to win a race early on, and that gave me a huge amount of confidence," he continued. "I'll be doing everything I can for the team over the coming weeks and next season. It's also a dream come true for me to turn professional alongside my brother, Elia. I'll be giving it everything for both him and the team."

Twenty-one-year-old Finé, meanwhile, also appears to have settled in nicely, debuting with the team at La Poly Normande in mid-August, and drawing particular praise from the team for the way he rode for his teammates at the Tour du Limousin at the end of the month.

Like so many other successful young road riders, Finé comes from a cyclo-cross background, and will represent France at under-23 level at the upcoming UCI Road World Championships in Yorkshire before starting his 2020 season as a fully fledged member of Cofidis.

"I'm really proud to be turning pro with such a renowned team as Cofidis," Finé said. "Everyone has made me feel so welcome, and I feel as though I've integrated really well.

"It's a huge challenge, but I'll be doing everything I can to meet expectations and repay the faith put into me," he said.

"It's always a pleasure, but also a duty, to allow young amateur riders to reach a milestone by joining the ranks of the professionals," he said. "Attilio and Eddy have already impressed the whole team, and we're excited to be able to count on them for next season."