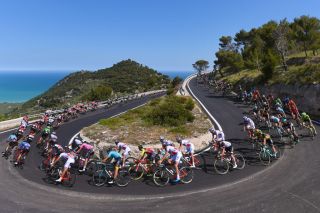 The Giro d'Italia on the Gargano Peninsula in 2017. (Image credit: Getty Images)

Gianni Bugno, Michele Bartoli and Mario Cipollini will be among the former professionals leading a ‘virtual’ Giro d’Italia stage on Sunday to raise money for the Italian Red Cross during the coronavirus pandemic.

The ‘Giro d’Italia Legends’ event is open to anyone with a smart trainer and a compatible Garmin Edge cycle computer, and it will see participants tackle the final 37.4km of stage 9 of the 2020 Giro to Vieste.

The event will serve as a ‘prologue’ to the Giro d’Italia Virtual, which will take place between over seven stages between April 18 and May 10. RCS Sport will unveil further details of that event next week.

“I’m very happy to have this in motion, for me it’s like winning a Classic,” Cipollini told La Gazzetta dello Sport.

“I consider myself to be the oldest of the young riders, and I’m convinced that all of the greats of cycling, like Coppi, Bartali, Magni, Gimondi and Martini were shouting something: ‘Open your heart to the people, help them.’ Cycling is suffering and in this moment of suffering, cycling must be present. I would like if we all showed how important this sport is for our country.”

The event will get underway at 5pm CET on Sunday and donations to the Italian Red Cross can be made via the Rete del Dono portal. It is the second ‘virtual’ event organised by RCS Sport following the postponement of most of its slate of 2020 racing. Over 4,000 people signed up for a virtual ride of the final 57km of Milan-San Remo in the company of Vincenzo Nibali on March 20, when La Classicissima had been due to take place.

Sunday’s ride will see participants take in a virtual ride along the scenic Gargano peninsula in Puglia on a short but punchy outing that takes in two laps of a circuit around Vieste. Riders will tackle the short and sharp climb of Chiesuola (1km at an average gradient of 9.3 per cent with a maximum slope of 17 per cent) on two occasions.

With all racing suspended until at least June 1 due to the COVID-19 pandemic, no new dates have been scheduled for the postponed Giro and Spring Classics, though the UCI has made plans to extend the season to November in a bid to run the events in the Autumn.