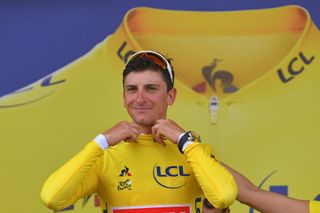 After a breakthrough debut season in the WorldTour, in which he won his second Giro d'Italia stage and wore the maillot jaune at the Tour de France, Giulio Ciccone might be forgiven for letting success go to his head.

However the 24-year-old is determined to use 2020 as yet another learning experience as he links up with veteran leader Vincenzo Nibali, who joined him at Trek-Segafredo in the off-season.

Race programmes for next year have yet to be announced but at this stage, although Nibali is a favourite to start the Giro d'Italia before focusing on the Tokyo Olympic Games later in the summer. Ciccone, who finished 16th overall at the Giro this year, is likely to shadow Nibali in the first half of the campaign, as he looks to soak up as much experience as possible.

"I still need to sit down and finalise things with the team but for sure I'll do a similar programme to Vincenzo," Ciccone told Cyclingnews at the recent Rouleur Classic.

"We'll do similar races but we need to confirm what we do from the Giro, Tour and Vuelta. We won't do every race together, but for sure we'll line up at the first big tour together."

Whether it's the Giro d'Italia or another Grand Tour in 2020, Ciccone does have his eyes set on another stage win as he looks to balance personal ambitions with those of the team.

"In my head, winning a stage is my number one goal. That's first. But I'm also going to be important for Vincenzo. I'll be there for support. If we go to the Giro then I might have more chances than at the Tour."

With Nibali, Richie Porte and Bauke Mollema all set for leading roles in Grand Tours next year, Ciccone is content to manage his progress steadily. All three of Trek-Segafredo's Grand Tour leaders are the wrong side of 30, a factor that gives Ciccone time to hone his skills.

"My dream is to do GC but now is too early for. I'm slow against the time trial and it's a really important discipline. I need to be patient and wait for my chance, but when it comes to riding with Vincenzo I can wait and I can gain experience. Maybe 2021 is a year I can look at GC but 2020 is too early," he said.

"I had a good year. My aim was the Giro and I won the blue jersey and took a stage. Then I went to the Tour and took the yellow jersey for two days. I think that made it an excellent season."

According to Ciccone, the experience of Bauke Mollema left the biggest impression on him this season. The pair raced the Giro, Tour and several other races together in the second half of the season, including Mollema's late triumph in Il Lombardia.

The Italian pinpointed Mollema's ability to stay calm when under pressure as a major attribute that he can aspire to in the coming years.

"The biggest lesson for me was to always remain calm. In those big races like the Grand Tour you can save a lot of energy if you just slow down. I spent a lot of time being really excited when it would have helped me if I just remained quiet.

"I learned that lesson from Bauke, who was my leader. Off the bike, he was always quiet and I was going full gas."