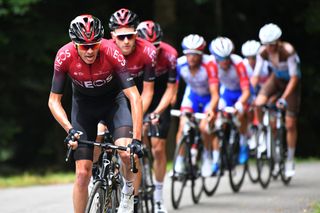 Chris Froome has become accustomed to frosty receptions from roadside fans in France over the years, but he was drawn into retaliation on stage 3 of the Route d'Occitanie on Monday.

Froome was riding with Groupama-FDJ's Bruno Armirail on the final climb of the Col de Beyrède when a spectator started booing him.

In a video that has been widely shared on social media, Froome can be seen raising his arm in remonstration as he looks back towards the spectator. He appears to shout 'va chier, connard', which roughly translates as 'fuck you, idiot'.

The spectator who filmed the incident can be heard encouraging the riders, shouting, 'Come on Bruno, accelerate accelerate, come on Froome, come on, come on, come on!' When Froome issues his retort to the booers, he says 'yes', seemingly in agreement with the Ineos rider.

Froome has won the Tour de France four times but has yet to fully win the hearts of the French public. He was notably booed loudly at the teams presentation of the 2018 Tour, shortly after the resolution of his salbutamol case, and in 2015 Team Ineos – then Team Sky – claimed urine was thrown at their riders on one of the mountain stages.

Froome has largely dealt diplomatically with questions of how he feels about such incidents, preferring to highlight the support that he does receive, but the video was evidence of his frustration.

On Monday's stage, Froome played team role for Team Ineos on the climb to the finish, going deep and sacrificing his own result to help set-up teammate Egan Bernal, who is also fellow candidate for leadership at this year's Tour de France. Froome eased up after his long effort on the front of the Team Ineos train and finished more than five minutes down.

The 35-year-old shrugged off questions about his form and recovery from his devastating crash at last year's Critérium du Dauphiné, saying he was working to set up Bernal and Pavel Sivakov, who placed second.

With question marks over team harmony following the announcement of Froome's move to Israel Start-Up Nation for 2021, he emphasised the teamwork that led to the Ineos one-two.

"I'm impressed with the whole team. The guys were amazing. Everyone did exactly as we planned today and we can be very happy with that as a team," Froome said after the stage.

"We did everything to set it up for Egan in the last couple of kilometres. The team rode fantastically today from the start took control straight away, basically we rode on the front all the way to the finish. It's fantastic.

"It's a special day that the guys are able to get first and second. Egan and Pavel are in fantastic shape at the moment. To be able to help them do that - I was really happy with how I was feeling out there."

La Route d'Occitanie concludes on Tuesday with an undulating stage to Rocamadour with a steep 1.4km finishing climb making it one for the puncheurs.