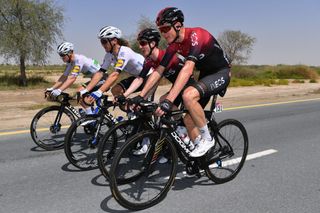 Speaking to Cyclingnews on Wednesday afternoon, the British rider said that a September Tour de France would remain his main goal, with the World Championships also a target.

"Looking at the potential dates set by the UCI, the Tour de France would be my number one target," Froome told Cyclingnews.

"Beyond that, I would hope to do the UCI Worlds, providing it doesn't clash with the Tour de France."

As a result of today's announcements, the end of the Tour de France (September 20) would clash with the elite men's time trial at the World Championships in Switzerland, though the road race would come a week later on September 27. The UCI has confirmed that the Worlds dates won't move, though there could be scope to move the elite men's individual time trials later in the week to allow Tour de France riders to compete for a rainbow jersey.

The Giro d'Italia and Vuelta a España will occupy new slots, with the Italian Grand Tour likely to run in October while the Vuelta could overlap and run into November.

Froome added that he would like to race one of them, though the possibility of doing so would depend on when exactly the new dates fall.

"Depending on the dates of the other Grand Tours, I would also like to do either the Vuelta a España or Giro d’Italia," Froome said. "I'll be discussing my program with [Ineos head coach] Tim Kerrison and the performance team over the coming weeks and will take it from there.

"This is all assuming that things keep heading in the right direction in terms of the COVID-19 situation."

Froome has been holed up in his home in the south of France for the past several weeks as the country shut down as a result of the COVID-19 coronavirus pandemic.

After returning to racing at the UAE Tour, Froome headed to South Africa for a training camp with teammate Dylan Van Baarle in mid-March but was forced to cut the trip short as European governments began to put into place lockdown and travel restrictions.

Earlier this week he said that his recovery from his brutal 2019 Critérium du Dauphiné crash is "pretty much complete" and also shed light on how his time in lockdown is doing after competing against his Ineos teammates in a special Zwift virtual race.