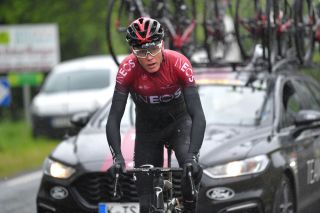 Chris Froome (Team Ineos) has revealed an ambitious goal on his road to recovery from the devastating crash he suffered at the Critérium du Dauphiné in June, stating that he hopes to take part in post-season criteriums before January.

Froome, who two weeks ago was spotted on his bike for the first time since the crash, and has since accidentally sliced a tendon in his thumb, revealed to The Telegraph that he aims to be back racing semi-competitively before the end of the year, and will line up at the Saitama Criterium in late October.

The four-time Tour de France champion is able to walk on crutches, and can ride on the turbo trainer for an hour at a time, but is reportedly recovering ahead of schedule, and so aimed to be racing again before the year's end.

"It would be great to be able to do some of those post-season events that I typically do in the off-season. Just to get back into the pro scene again. It would great if I could do something before January," he said in the Telegraph interview published on Friday.

The Saitama Criterium, run by Tour de France organiser ASO, has since revealed that Froome will be taking part in the race, which is held on October 27.

Froome, who crashed into a wall while descending during a time trial recon at the Dauphiné, was airlifted to hospital after the June accident, undergoing emergency surgery after suffering from a broken leg, hip, ribs, vertebrae and elbow.

The Brit said that he has no memory of the incident, which saw him lose four pints of blood in addition to the broken bones. His memory loss includes minutes either side of the crash.

"There's probably a five-minute window where I can't remember anything – and it drives me crazy," he said.

"Apparently, we went through a town after the descent. I don’t remember. It was in that town, when there was a long straight, slightly downhill section, that it happened.

"I guess the fact that I can't remember anything means it's not going to haunt me in that sense."

Despite the laundry list of injuries and testimony from passing riders, including Dan Martin, a number of conspiracy theories relating to Froome's crash emerged on internet forums and Twitter in the aftermath.

Froome called them "ridiculous", adding that "all the riders who rode past me when I was lying on the side of the road knew what happened."

Of course, aside from the earlier – and less strenuous – goal of riding post-season criteriums, there's the Tour de France to think about. Froome is aiming for a fifth title to place him among the greats – Jacques Anquetil, Eddy Merckx, Bernard Hinault and Miguel Indurain.

Success in 2020 is the aim, with the Tokyo Olympics, which come a week later also "appetising" for Froome, given the 5000 metres of climbing on the course.

"It should be an extremely grueling race. And coming a week after doing the Tour – assuming I'm doing the Tour ­– it's almost perfect. I’d like to throw my hat in the ring for both," he said of the road race and time trial.

There's a long way to go before Tokyo rolls around, and it includes the Tour de France, Froome's major goal, where he'll not only have to return to his previous level but exceed it, in order to come out on top again. That's what Froome said, at least, perhaps with his own teammate and reigning Tour champion Egan Bernal in mind.

"The bar is being raised every year," he said.

"Everyone is going to altitude. Everyone is doing the same kind of training and following the same nutritional plans going into Grand Tours. So, the differences are very marginal.

"But I think so much of it goes back to basics. I’m going to have to train harder than I’ve ever trained before to get back there again.

"A fifth Tour title was a big deal in itself. But going for a fifth title off what was potentially a career-ending crash… That would be even bigger. There were loads of people who came out after the crash and said 'He's done. He'll never win another Tour.' They only spur me on."