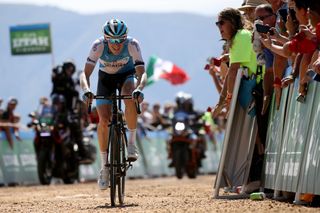 Israel Start-Up Nation have named their seven-man squad for the 2020 Tour Down Under, which gets under way in Adelaide, Australia, later this month. British time trial champion Alex Dowsett features, along with sprinters André Greipel and Rick Zabel, and climbers Ben Hermans and James Piccoli.

The presence of two-time Tour Down Under winner Greipel, who also holds the race record for stage wins with 18, was announced last week, but the confirmation of the six teammates that will join him gives some idea of what to expect from the Israeli squad.

Either Greipel or Zabel – possibly both of them – will concentrate on bagging stage wins, and, while there's no time trial, the team will be able to count on Dowsett along the way, likely including him as part of the sprint train.

Two-time Tour Down Under champion André Greipel returns to Australia

The winner of the 2019 Tour of Utah, Hermans, and the overall runner-up at the same event, Canadian climber Piccoli, who's a new signing to the team this year, are both very capable of being in the mix when it comes to the overall title, which will be decided with two ascents of Willunga Hill on January 26.

The team is completed by Israel's Omer Goldstein and Canada's Guillaume Boivin.

Meanwhile, Polish outfit CCC Team were the first WorldTour team to arrive in Adelaide on Sunday, ready to start a two-week training camp in the build-up to the race, with the other teams expected to begin arriving in South Australia from later this week.

AG2R La Mondiale leader Romain Bardet is thought to already be in Australia, acclimatising to the heat, while other big names to appear at the WorldTour stage race include new Cofidis signing Elia Viviani, road race world champion Mads Pedersen and his Trek-Segafredo teammate – and 2017 winner – Richie Porte, and defending champion Daryl Impey, who'll be accompanied by his Mitchelton-Scott teammate, and winner of the 2018 Vuelta a España, Simon Yates.