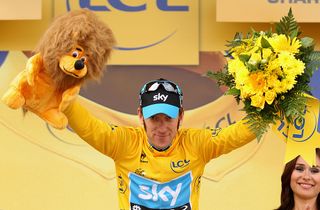 Former Team Sky rider and 2012 Tour de France winner Bradley Wiggins saw encouraging signs for his former squad on stage 6 after Ineos Grenadiers controlled the pace of the peloton on the final two climbs of the race.

The defending champions had looked vulnerable at times during this year’s race and came into the Tour on the back foot after a number of recent dominant performances from Jumbo Visma and their leader Primož Roglič. Last year’s Tour winner Egan Bernal has complained of a back problem that saw him abandon the Critérium du Dauphiné, and the Colombian lost precious time bonuses on stage 4 when Roglic won, but the 23-year-old still sits fifth overall, 13 seconds off the race lead, and 10 seconds adrift of Roglic.

On stage 6 he reportedly shouted at mountain domestique Michał Kwiatkowski when the former world champion began setting the pace inside the closing kilometres, and it should also be noted that the bunch failed to draw any time back on the day-long break when Ineos set the pace on both the first-category Col de la Lusette and then the final 8km haul to the summit of the Mont Aigoual as the GC contenders saved their powder for the more testing stages in the Pyrenees that lie ahead.

"It was classic Dave Brailsford, the first few days it was clear it wasn’t like the Ineos we have become accustomed to over the past couple of years, riding at the front, making their presence felt," a bullish Wiggins said on Eurosport's Breakaway.

"Today, from the first kilometre, they were right up there and Jumbo-Visma were very happy for them to ride up there and they stuck behind. It was a statement of intent from Ineos today, showing they would not let other teams bully them around and that is classic Dave Brailsford."

Ineos’ rivals sat on the wheels when the British team took control of the race, with Jumbo-Visma, for the first time in this year’s race, deciding not to take the initiative.

Roglič admitted that Ineos had set a hard tempo, but with the final climb providing little opportunity to attack, the 2019 Vuelta a España winner was willing to resist the chance to try and put Bernal under pressure.

"Ineos did a really hard tempo. For us, it was ok and obviously also for all the rest. It was not totally flat so at the end there were some hills. The breakaway was super strong. It was a nice day for us again, everything is under control," he told Sporza.

The truce displayed by the yellow jersey contenders meant that Adam Yates enjoyed a relatively trouble-free day, although his team did most of the pulling after the initial eight-rider break moved clear. Yates is on his way to Ineos next year after turning down a contract extension at Mitchelton-Scott and Wiggins believes Brailsford will have seen enough in the 28-year-old - who previously finished fourth and won the white jersey - to determine that he can win a Grand Tour in the future.

"I think Dave Brailsford will be looking at him and thinking that he’s already proven himself capable to win a Tour de France. He’s an amazing rider, lots of the guys that grew up with him and Simon in the academy will actually say Adam is the better rider of the two, which is quite something when you consider Simon’s palmarès. He’s a phenomenal talent, and we keep saying he’s a talent, but he’s actually already achieving. This is his time now, he’s at that age, they are such down to earth lads, so measured, so level headed and I think he’s the model athlete for Dave Brailsford in that setup and I see them moulding him into winning, maybe not the Tour de France, but Giros and Vueltas for sure - imagine him going up against his brother!"