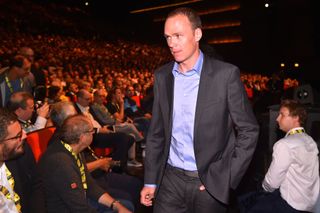 Brailsford warned people not to disregard Froome’s ability to return from the devastating injuries suffered in a harrowing crash while he was warming up for the time trial stage at the Criterium du Dauphine in June.

"After the accident, Chris worked incredibly hard,” Brailsford told Gazzetta della Sport. “He is putting all the courage and determination into training that led him to win seven Grand Tours to be ready in time for the start of the 2020 Tour.”

Froome fractured his hip, elbow, femur, sternum and vertebrae in the crash and had extensive surgery to repair his injuries. He then underwent a second surgery in November to remove a metal plate in his hip and screws in his elbow.

His recovery was initially described as going well, as he returned to training earlier this summer, but the recent reports in Bicisport and SpazioCiclismo.com painted a much different picture, with Team Ineos sports director Dario David Cioni reportedly questioning if Froome would ever return to his Grand Tour-winning form.

Portal: It'll be tough for Chris Froome to return to his best

Chris Froome releasing video about his crash and recovery

Chris Froome out of the Tour de France – Podcast Special

Froome moved quickly to quash that speculation, however, revealing that the training camp he left early – and on which the recent reporting was based – took place in December and not recently, as reported. He is scheduled to take part in another training camp in Gran Canaria this week, with Brailsford telling Gazzetta that the Team Ineos leader plans to stay a week longer than his teammates

"No one should underestimate Froome,” Brailsford said. “He and Ineos will really do everything they can to get him to his best by the start [of the Tour de France] in Nice on Saturday, 27 June."

Froome had hoped to add a record-tying fifth yellow jersey to his collection in 2019, but the Dauphine crash knocked him out for the season and opened the door for young Colombian and Ineos teammate Egan Bernal to seize the race ahead of defending champion Gerraint Thomas, also of Team Ineos.

In a tweet posted Sunday, Froome hit back against suggestions his recovery was not going well.

“Hope that I can set this straight, I was last at a training camp at the beginning of December,” he wrote. “ My recovery is going well and I will be heading to my next training camp on Thursday. Onward.”