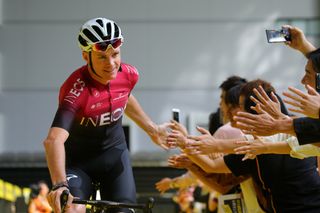 Chris Froome (Team Ineos) is perfectly able to ride his bike – albeit much slower than before – but any sense of expectation concerning his comeback from serious injury is tempered when you see him walk. As he drags his right leg along in a pronounced limp, a record-equalling fifth Tour de France title next July seems a very hazy prospect indeed.

"I can certainly ride a bike better than I can walk at the moment," Froome told Cyclingnews in Japan at the Saitama Criterium at the weekend.

"There was a stage, when I was on crutches, when I needed crutches even to get onto my bike. I could see the looks I was getting from people, walking over to my bike with crutches, but I'd then get on and it would actually be much better on the bike."

Nearly five months on from the crash that left him with fractures to his femur, hip, elbow, vertebrae and sternum, Froome is back riding but is unable to turn the pedals at anything more than what he describes as "tourist pace".

He lagged behind when he went to check out the 2020 Olympics course with Jakob Fuglsang, Romain Bardet, and Michal Kiwatkowski on Friday, and then decided against riding Sunday's Saitama Criterium.

He lined up for the 3.1km team time trial earlier in the day but felt he wasn't ready to ride in a peloton for 60km, even in what is essentially an exhibition event.

An important phase of his rehabilitation comes in a week or so when he goes under the knife again to remove the various bits of metal that stabilised his broken bones. He insisted everything is healing better than expected, showing us a photo of a recent X-ray in which a large metal plate can be seen outside his hip, and two screws through his femur just above the knee.

"The hip plate, that's why I'm limping at the moment – it's trapping a few tendons and I'm finding it difficult to put pressure on it when I walk," he said.

"The femur fracture, this is amazing – there's a really good recovery there, the bone has got really strong. Those screws are staying in, probably forever. I'm really lucky the breaks I have are outside the joints, in the middle of the bones. It's just the elbow that's on a joint but, at the same time, it's only the elbow, and it's healing really well, too."

Once he's recovered from the operation, Froome says he'll be ready to start training in earnest, at which point the prospect of returning to professional racing should start to come into focus.

"I will need a few weeks off post-surgery, but hopefully I'll be able to train normally again in December, and hopefully things continue from there," he said. "I hope to be back racing by February, at least, and I'll just take it from there, really."

As for next year's Tour de France, and whether a fifth title – which would bring him level with Eddy Merckx, Jacques Anquetil, Bernard Hinault and Miguel Indurain – is a realistic target, Froome sees no reason to write it off.

"There are no guarantees in sport – and in life in general – with this kind of process, but if I'm back racing by February... I don't know what level that would be, but I'd hope that within four months I could get back to racing the Tour de France as my normal self. That's my goal and, until I find any reason to believe it's not possible, I'm making it my objective," he said.

"That's what's motivating me at the moment. I feel I'm so close to joining the club of five. It's a really big goal for me. Also with the Olympics next year on a really hilly course, that's the perfect objective to follow up the Tour de France. It's a season that has a lot to offer."

It may well be that Froome is unable to complete his comeback in time to win that fifth title next July. He has also had to come to terms with the possibility that his former level may never return.

"That has been my biggest concern," he said. "When the surgeon said, 'OK, you can get back to racing,' I've always wondered… It's one thing to race, and it's another thing to actually try to win the Tour de France. Those are two very different levels.

"It remains to be seen. As I said, there are no guarantees. What I know is that I'm going to give it absolutely everything I've got. I still feel as if I've got more in me."