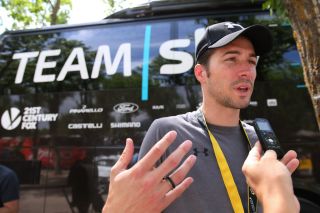 Team Ineos sports director Nicolas Portal says that although it will be difficult for the team's leader, Chris Froome, to return to his best level following his crash at this year's Critérium du Dauphiné, the British rider has set his sights on winning a fifth Tour de France in 2020.

Speaking during a wide-ranging interview with French website Cyclism'Actu this week, Portal said that he's happy to be part of a harmonious team, all pulling in the same direction, even though it may look from the outside as though Team Ineos is packed with a number of chiefs and not that many Indians, with a raft of up-and-coming young riders, too.

One of those young riders – Egan Bernal – won the Tour de France in the summer, finishing ahead of 2018 champion Geraint Thomas, and giving Ineos an illustrious 1-2 at the world's biggest bike race, while four-time winner Froome was forced to watch on from home.

"It was such bad luck for 'Froomey', with that massive crash at the Dauphiné," Portal told Cyclism'Actu.

"But knowing Chris, he'll give himself a goal, which will be to compete at the 2020 Tour. The best way to be able to recover as quickly as possible is to do it right. He has this Tour objective: he really wants to win a fifth Tour to make history. I think he's got time on his side, but it's true that it'll be difficult.

"I do think he'll recover, but recovering completely – back to 100 per cent as an athlete – is going to be tough," Portal continued. "We hope that he can, of course, and support him 100 per cent, but what happened to him was very serious, and even having got back on his bike as he has been for the past few weeks is already a massive achievement."

The off-season signing of 2019 Giro d'Italia winner Richard Carapaz adds yet another proven Grand Tour winner to the already stodgy Team Ineos mix, but Portal sees having capable leaders as an advantage, rather than a difficulty.

"We have to think about the future, and Richard wanted to join the team; it wasn't like we were forcing him to come," Portal said.

"We have proven winners in Froomey and Geraint, and we have Egan, who will continue to win – or, at least, we hope he will. But we also have to look to the future, to riders like Pavel [Sivakov] and Carapaz. We don't know how long Froomey and 'G' will be able to stay at the top level like that, but, however long it is, we have to be ready.

"The other teams around us are also getting stronger," he continued. "When we see that Jumbo-Visma, in the space of just a few months, have gone from a very good team to an extremely strong one for 2020, we have to be ready.

"It's the same at teams like Movistar, and others, so we need to strengthen our squad and think about the future," he said.

Along with Bernal and Sivakov, Portal mentioned the likes of Ivan Sosa, Filippo Ganna and Tao Geoghegan Hart as other names on the team that are likely to keep getting better, but dismissed any future leadership problems.

"Everyone's at a different point in their career. It's not the first time that we've had a lot of talent – both young and old – on the team," he said. "It's something we communicate and talk and about a lot, and it all seems to be going well.

"It's nice because we often try mixing the younger guys with the more experienced riders at races in order for them to learn. There's a real investment in the young riders, and it works," Portal said.

"This year, we've seen young riders who are hungry, and capable of doing some amazing things on the bike. There's something going on, that's for sure; that's what we want anyway.

"Egan is something special, capable of winning at the age of 20, 21, but we knew that already. It may take another year or two to see what Ivan, Filippo or even Pavel can really do, but we can already see how hard they work, and can see them winning already," he said.