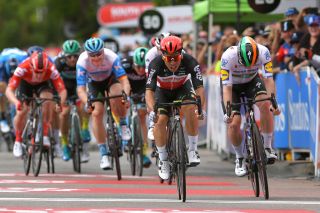 Caleb Ewan and Sam Bennett at the Tour Down Under (Image credit: Getty Images Sport)

After Giacomo Nizzolo (NTT Pro Cycling) sprinted to victory on stage 5 of the Tour Down Under in Victor Harbour, there was time for some of the men who missed out to reflect on the result.

Caleb Ewan (Lotto Soudal) won stages 2 and 4 but could only manage eighth place on the penultimate stage of the race, while stage 1 winner Sam Bennett (Deceuninck-QuickStep) ended up third after a fast finish.

The climb of Kerby Hill, which topped out 23km from the finish line, complicated the situation for the sprinters, as GC teams pushed the pace. Things came back together on the run-in, but the dash for the line was a disorganised one, with Nizzolo part of a three-man group – along with Ewan's lead out man Roger Kluge – who split away from the front of the peloton on the final corner.

"It was tough today to make it over the climb," Ewan said after the stage. "Luckily, I had a few guys with me, and they brought back that front group in the final 10km.

"In the end, I should have just followed Roger, because he did a perfect lead out. I thought he'd already done too much before, because he kept me out of the wind after the climb and then he was always moving me into position.

"I thought that, by the time he got to that corner, his job would be finished, but he was so strong. He kept going all the way to 150 metres to go and no-one could come past. In the end I made a mistake to drop back off his wheel and find another sprinter's wheel."

For Bennett, who is only six race days into his time with Deceuninck-QuickStep, it's still a case of experimenting with how to race sprint finishes, as he and his new teammates worked out how to perfect their lead-out.

Bennett missed the decisive late split that saw Nizzolo beat Simone Consonni (Cofidis) to the win, but he sped to the line with an impressive fast finish, bridging the gap to the top two. With another 20 metres or so, it could easily have been win number two for the Irishman.

"I wish I could've won," he said after the stage. "We were trying new things in the final, so it was a good learning curve today. We left it later to see if we could come with more speed, but there was a gap that opened up in the final corner which was hard to close.

"The final kilometre was quick with the tailwind. In general, I was happy with my performance getting over the climb, and I'm happy with the whole team. They did a fantastic job, and everyone did everything perfectly.

"It was just little details in the last two corners again. But it's early days yet, we're all kind of new to each other, getting a feel for it, and we'll be better next time."

For Elia Viviani, who also joined a new team for 2020 in Cofidis, the stage was a tough battle as he fought on despite harsh road rash suffered in the mass pileup late on stage 2. The Italian posted an image of his injuries to Twitter after the stage, also praising his team and Consonni's sprint to second place.

I believe my face says it all about how hard for today stage for me. Anyway I proud of how @teamcofidis did another strong performance with Simone Consonni 2nd and close to his first WT win! Congrats also to @Giacomonizzolo for taking the 1st place. #tourdownunder 📸 Russ Ellis pic.twitter.com/rOuYmWfcuEJanuary 25, 2020