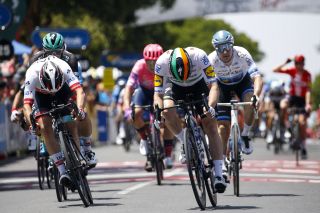 Cofidis’ Elia Viviani (right) can only watch on as Sam Bennett (Deceuninck-QuickStep) wins stage 1 of the 2020 Tour Down Under (Image credit: Bettini Photo)

Elia Viviani could only watch from behind as Deceuninck-QuickStep produced a near-perfect lead-out before Sam Bennett finished off the job to win the opening stage of the Tour Down Under in Tanunda on Tuesday.

Viviani benefited from the Deceuninck-QuickStep lead out in 2018 and 2019, collecting a haul of 28 victories, including the opening stage at last year's Tour Down Under. The Italian is racing for Cofidis in 2020 after being hired by the French team to spearhead their step up into the WorldTour.

Viviani has brought Simone Consonni and Fabio Sabatini with him to Cofidis, but in contrast to Deceuninck-QuickStep's textbook sprint execution, they never connected in the Tour Down Under sprint, and Viviani could only finish a disappointed fourth.

"We knew that going to Deceuninck-QuickStep would be a significant advantage for Bennett. He's a top sprinter and doesn't make a mistake when he gets a chance to win," Viviani told Cyclingnews at the Cofidis team car after a moment of reflection and getting out of race clothing.

"I was only three places behind Bennett when the sprint started but it was so fast that there was no real chance to move up and pass anyone. The problem was before, between three kilometres to go and 250 metres to go. We weren't where we should have been, so we got stuck in the scrum. When that happens, you end up hitting your knuckles on one side and then your shoe on the other. You accelerate, ease up, accelerate and ease up. I did too many sprints before the sprint that really mattered. We weren't together and that was the problem."

Viviani was not angry – it is only the second sprint of the 2020 season – but Cofidis will carry out a detailed debrief to learn where they went wrong.

"It's about learning how to get it right," Viviani said.

"We'll have a debrief to understand where we lost each other. Consonni has to follow Sabatini and stay together; we can't be on different sides of the road and just hope to come together."

Viviani hopes to bounce back on Wednesday's stage 2 to Stirling but knows it will not be easy to win.

"We'll give it a go. I've finished in the top 10 in Stirling in the past but it's a hard sprint, and not every sprinter will be up there to fight for victory," he said.