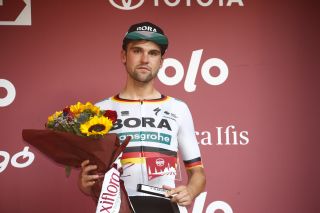 Max Schachmann (Bora-Hansgrohe) opened the restart of the WorldTour with a podium finish at Strade Bianche in Siena on Saturday. The German champion said the race was tricky and dangerous at times but gave it everything he had to try and win, coming up half a minute shy of the day's solo winner Wout van Aert (Jumbo-Visma).

"I'm not disappointed because I expected to do worse in the heat but in the end I managed it quite well," said Schachmann, who finished third place after a sprint for second against Davide Formolo (UAE Team Emirates).

"It was tricky and it was dangerous in the gravel sectors. I did just a short recon yesterday. In the last sector I didn't risk enough and Wout did an excellent move there. He showed his cyclo-cross skills and made the final move."

Van Aert made his winning move with 12km to go over the steep gravel sector, Le Tolfe. Schachman, Formolo, and at first Bettiol tried to chase but Bettiol struggled to keep pace, and the remaining two chasers could not close the gap to Van Aert.

Van Aert soloed to the victory while Formolo and Schachman sprinted for second place some 30 seconds later.

"I tried to catch him," Schachmann said. "I went all in for the victory and in the end I missed a little bit the legs in the sprint, but I gave it everything. I'm ready for the next races."

Strade Bianche marked the official restart of the WorldTour calendar after the season was shutdown due to COVID-19 coronavirus in March.

"I'm happy to race again," Schachmann said. "It's great race, great scenery and in the end a top three is a great start."