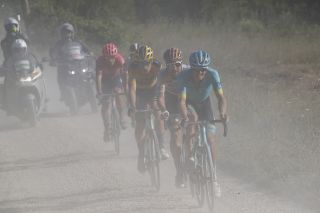 Jakob Fuglsang (Astana) stopped to cool down in the Piazza del Campo after finishing fifth in Strade Bianche, regretting making a solo attack with 50km to go on the terrible Monte Santa Maria dirt road section that put him into the red zone under the scorching Tuscan sun in the heat of the race.

The attack happened virtually by chance and the Dane, who finished second behind Julian Alaphilippe in 2019, decided to play his cards but he paid a high price and was then dropped from the front group with nine kilometres to go.

"After my little attack, I exploded because of the heat. I found it difficult to cool down and get my legs back. You can't cool down in 40°C," he regretted, his loyal soigneur pouring water over his head before Fuglsang looked back on the race and then headed to the Astana team bus.

Schachmann: It was a tricky, dangerous Strade Bianche

"I'd almost say that quarantine is nicer than this…" he joked. "No, of course not, it's nice to be back, but wow! It's different than racing in March for sure. I think the heat killed off most people today, everyone was suffering. Then with the intensity of it being the first race after four months, it made it difficult."

Fuglsang confirmed that Deceuninck-QuickStep made it a hard, selective race from 90km out. He, and even the Belgian team, paid for their efforts in the final sectors of dirt roads.

"Alaphilippe and Deceuninck made it hard with his early attack to open the race. All in all, I was there in the front at the end but in the downhill with all the cat and mouse games, there was just the fifth place left for me," he said.

Fuglsang took on the race, riding faster than even the television motorbike, which he angrily waved his hand on the descent of Monte Santa Maria, as he tried to find the best line through the clouds of dust.

"I waved at the motorbikes because I couldn't see, I don't think they could see either out there," he said.

"I was there at the front but probably spent a bit with my attack. When Schachmann went, I went with him and dropped him but they worked behind and there was nothing I could do."

Fuglsang was clearly disappointed but promised to be back in 2021 to try again.

"It's a cool race. I love it and I'd love to win it," he said, knowing his mountain bike roots and climbing ability make him a real contender.

"Many guys saw me as one of the favourites and that makes it even harder for me. But I'll be back next year and give it a new shot."