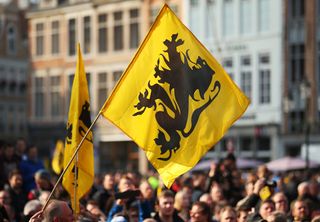 The 100th edition of the Tour of Flanders (Image credit: Getty Images Sport)

The Belgian cycling federation has decided to extends its road season through October 31 to accommodate races that were postponed this spring due to the coronavirus pandemic, but the mayor of Kluisbergen, the town in which a key Tour of Flanders climb, the Oude Kwaremont, lies, says that the chance of organising the race as it is normally run is slim to none.

Mayor Philippe Willequet told Sporza.be, "Nobody has a crystal ball. Let us first see how the virus evolves and then allow other things step by step, if necessary. But I think that the Ronde is done for this season and for this year. It will not go ahead."

The Tour of Flanders was due to take place on April 5, 2020, but was postponed last week as the coronavirus spread across Europe. The death toll in Belgium has risen to 178 with over 4,000 active cases.

Coronavirus: Lappartient says Monuments and shortened Giro d'Italia could be held in Autumn

Should the pandemic come under control this summer, the Belgian federation added road season dates in October to reorganise races, but Willequet said it probably would not be feasible to put on the Tour pf Flanders as it usually is run this year.

"Organizing De Ronde in October is not possible. If it were to continue, it would never be like the previous editions. When you talk about the Tour of Flanders, you are talking about months of preparation. Organization, police, signalmen, that are all things that are prepared to perfection.

"Setting a date now with just a few months of preparation would be quite a challenge. And if it were possible in the end, it wouldn't be in its current form. I think the odds are slim, if not nonexistent."

The Belgian Cycling Federation and Cycling Flanders made a joint decision to extend the calendar in the hopes that some of the Classics can be run in the autumn. Organisers whose races were scheduled to take place before April 30 have been asked if they want another date on the calendar after July 1, but priority on dates will be given to races already on the schedule.

For races scheduled to take place in May that have not yet been cancelled, organisers will be informed by April 3 if their event can be run. The federation has already chosen to move the Belgian Championship time trial junior and U23 races from May 1 to July 12, while the U23 women's time trial will move to the date of the elite and professional races on June 18 in Koksijde to avoid a conflict with the BeNe Ladies Tour.

Conflicts with existing races will severely limit the rescheduling of major races should European countries reopen for normal business this summer.

The UCI and the Belgian federations agree that existing events will hold their original dates, and races like Tour of Flanders, Paris-Roubaix, Gent-Wevelgem, Scheldeprijs, Liège-Bastogne-Liège and Flèche Wallonne would be fighting for dates in between the Tour de France, Vuelta a España and the World Championships.

Willequet said losing the Tour of Flanders for the year was unavoidable in light of the coronavirus and it will make April 5 an unusually quiet day. "We do have a special connection with cycling events. I am especially sorry for the cycling enthusiasts and the organizers. They put a lot of time, money and effort into this.

"On the day of De Ronde, there are more people dining out than there are residents in Kluisbergen, and I will not mention all the sports enthusiasts on bicycles and many hikers who come with the cyclists. It is a great high day for Kluisbergen and the surrounding area that has disappeared."