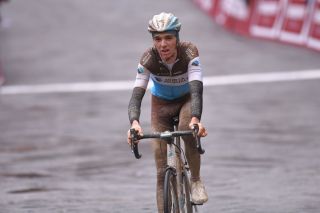 This autumn, we could see two-time Tour de France podium finisher Romain Bardet on the cobbles of the Tour of Flanders and Paris-Roubaix, with the Frenchman keen for a full Classics campaign in the rearranged season.

Bardet had been set to target the Giro d'Italia, along with the Olympic Games, Vuelta a España, and World Championships before the COVID-19 pandemic brought racing to a halt.

With the cycling calendar now rescheduled, he has confirmed he will ride the Tour de France after all, in its new dates of August 29-September 20, followed by the Worlds, but faces a decision about what to do after that.

Bardet: There won't be room for three Grand Tours in three months

While his AG2R La Mondiale team manager has said the Giro falls too close to the Tour and Worlds, one option is to ride the truncated Vuelta a España in late October and November. However, after the Ardennes Classics in early October, the cobbled Classics come later in the month, with Flanders on October 18 and Roubaix the following Sunday. Skipping the Vuelta would also enable Bardet to ride Il Lombardia on the 31st.

"The new calendar might allow me to think about riding the cobbled classics. The Tour of Flanders and Paris-Roubaix are races I really want to participate in, and in a normal season it's difficult given the preparations for the Grand Tours," Bardet said in a diary for French newspaper Le Monde.

"Now they're during the Vuelta, so there are choices to be made, and we'll see how the team spreads their resources, but it's clear that I'd prefer to go all the way in that nice Classics campaign. It promises to be epic, with wet and greasy pavé at the end of October."

Bardet has twice finished on the podium of the Tour but also has a strong one-day palmarès, with podiums at Liège-Bastogne-Liège, Strade Bianche, and the World Championships.

His ride at the 2018 Strade Bianche, where he finished second behind Tiesj Benoot after riding away from Wout Van Aert, was a sign of his ability on the rougher surfaces, although AG2R's clear leader for the cobbles is Oliver Naesen.

"There are certain moments of overlap, and decisions will have to be made but, for a rider like myself, it's mouth-watering," Bardet said.

"The form we'll build at the Tour de France is going to serve us well for a magnificent programme of Classics. Those who ride the Tour will have a real advantage at the Ardennes Classics and then the cobbled Classics."