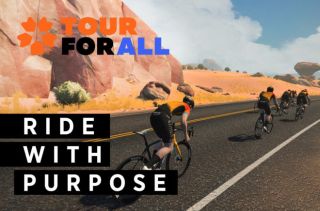 Bahrain McLaren will be one of 10 men's teams confirmed to race the Zwift Tour for All held from May 4-8. Team Principal Rod Ellingworth said the five-stage event is important to help the riders stay in the competitive spirit and to provide exposure to the team's title brands while real-world racing has been suspended due to COVID-19.

"The Tour for All brings together several critical elements for our team during this unprecedented time. It keeps us in a racing mindset, drives exposure for our partners and gives our fans a unique opportunity to watch and ride with us. What’s more, it’s all for a great cause," said Ellingworth in a press statement.

Bahrain McLaren will take the virtual start line at the Tour for All on May 4 along with Alpecin-Fenix, CCC Team, Groupama-FDJ, Israel Start-Up Nation, NTT Pro Cycling, Rally Cycling, Team Cofidis, Mitchelton-Scott and EF Pro Cycling.

Men's and women's teams will compete in separate races, with women competing before the men and the live television broadcast divided equally on Eurosport and Global Cycling Network (GCN).

Zwift: your ultimate guide Zwift powerups explained and when to use them Pain caves of the pro peloton rated - part two

Zwift is also hosting a corresponding Tour for All month-long fundraiser for the Doctors Without Borders (Médecins Sans Frontières) COVID-19 crisis fund. Zwift will start the Tour with a $125,000 donation to the MSF to support the pandemic relief efforts. They will then match that donation at the end of the Tour if 250,000 participants finish at least one stage.

The UCI International Calendar has been halted since the novel coronavirus swept across the globe in February and early March. The sport governing body has suspended all competition until July 1 and all WorldTour competition until August 1, while more than 800 race organisers have requested cancellation of their events.

Five WorldTour teams have announced either volunteered salary reductions or have been forced to accept pay cuts including Astana, Lotto Soudal, CCC Team, Mitchelton-Scott, and riders from Bahrain McLaren have taken a 70 per cent pay cut for March, April and May.

The UCI has already announced the rescheduled dates of the Tour de France from August 29-September 20, and it is expected to publish a revised late-season WorldTour calendar on May 5.

Bahrain McLaren's Mark Cavendish recently completed 10 hours 37 minutes and 32 seconds riding in the Zwift's 'Everesting' challenge. It was the equivalent of the height of Mount Everest - 8,848m - and he and former teammate Luke Rowe rode 211 kilometres.

The Zwift Tour for All professional stage race will begin with a 52.9km race on the Innsbruck circuit on May 4. Stage 2 will be a 46.2km race on the Richmond 'Cobbled Climb' circuit. The riders will then take on 72.6km on the Watopia world's 'Medio Fondo' loop. The penultimate stage is also held on Watopia featuring 42.8km on 'Sand and Sequoias'. The racing will end with 'Quatch Quest' a 46.5km race the finishes on the summit of Alpe du Zwift on May 8.