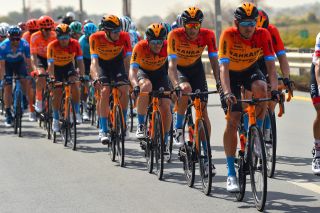 Cyclingnews has learned that Bahrain McLaren riders have been forced to take a 70 per cent pay cut for three months. The riders were notified via a team briefing on April 1, with their March, April and May payslips all affected.

The cuts have been made due to the ongoing coronavirus Covid-19 pandemic, which has seen races either postponed or cancelled in recent weeks. With no certainty over when the season will start, riders on several teams have been forced to take cuts.

Last week Lotto-Soudal riders were asked to take a 10 per cent cut, while earlier this week Astana staff faced a 30 per cent drop in their wages. However, the cuts made by Bahrain McLaren are by far the most drastic yet. The team have a number of high-profile stars on their roster, from Mark Cavendish to Mikel Landa and Wout Poels.

In an email seen by Cyclingnews, the riders were told that, “as outlined this morning on the team briefing we are taking necessary and immediate steps to ensure the survival of the team through the most challenging of situations.

“In your particular instance, we are deferring the payment of 70% of your monthly salary, for March, April and May 2020.”

Cyclingnews reached out to Bahrain McLaren for comment but did not receive a response at the time of publication.

The website has also learned that in a second correspondence between the team manager Rod Ellingworth and rest of the staff and riders it was announced that both Ellingworth and the senior management would forgo their salaries for the next three months.

“At this time we have decided that both I and other senior management will forego our salaries for three months, and we are deferring, not cutting, a percentage of all rider and staff salaries for the same period,” Ellingworth wrote.

“As with most businesses around the world, our income during this period is subject to great uncertainty. As such we are acting in the longer term interests of our riders and staff, to ensure we have the means to operate at a competitive and viable level once this crisis abates.

"We recognise the temporary reduction in our riders’ earnings will be difficult, but ask that you understand the seriousness of the challenge we face as a team. The contribution and support of every rider and member of staff – before, during and after this pandemic, is greatly appreciated.”