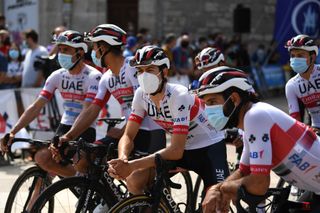 There has been a further coronavirus scare at the Vuelta a Burgos, with UAE Team Emriates removing three of their riders from the race ahead of stage 2.

The team revealed that Sebastian Molano, Cristian Muñoz and Camilo Ardila all completed stage 1 on Tuesday but they did not take to the start in Castrojeriz on Wednesday.

The Colombian trio all came into contact recently with an as-yet-unnamed person who tested positive for COVID-19 on Tuesday.

"The three Colombian athletes on Saturday had been in recent contact with a person (outside the race) who turned out to be positive for COVID-19 yesterday. Following the protocol of the Team and the UCI, the three riders were isolated, sent home and will all undergo another test today," the team said on Wednesday morning.

The team added that all three riders, in accordance with the UCI's health protocol, were tested twice before the race started on Tuesday, firstly six days in advance and secondly 72 hours before the start. All the tests were negative.

The removal of Molano, Muñoz, and Ardila leaves UAE Team Emirates with four riders in the field, two of whom have already had COVID-19.

Fernando Gaviria notably spent a month in quarantine after contracting the disease at the UAE Tour in late February, and his lead-out man Max Richeze – who's also in Burgos – also caught it there. The other two members of the UAE Team Emirates squad in Burgos are the GC leader, Fabio Aru, and the Spaniard David de la Cruz.

Speaking to Cyclingnews at the start of stage 2, UAE sports director Joxean Fernandez ‘Matxin’ said "it was something that had to be done."

"As a team we had all the experience of what happened back this spring [at the UA Tour – Ed.] and we know how important a question this is. As soon as the riders found out that the guy they had been in contact with had tested positive, they told management and we decided they could not continue."

He confirmed that the three had done their pre-race tests and returned double negative for COVID-19, but that “there is no point in taking un-necessary risks."
“It’s obviously a blow but under these circumstances, health has to take priority and this is what matters the most.”

The news follows the withdrawal of two Israel Start-Up Nation riders ahead of the opening stage, for similar reasons.

Itamar Einhorn was pulled on the eve of the race, having recently come into contact with the COVID-positive Omer Goldstein, while Alex Dowsett was also removed on the morning of stage 1 since he'd been in contact with Einhorn. Both riders were tested on Monday and the results have come back negative.

The UAE cases are likely to inspire further debate, but above all trepidation as the peloton holds its breath for the return of the extra test results.