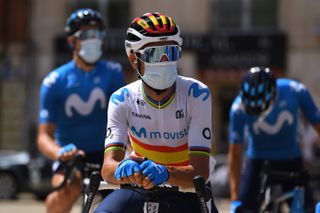 Alejandro Valverde on the start line of the Vuelta a Burgos (Image credit: Getty Images)

The fraught nature of racing in a pandemic was laid bare on the opening day of the Vuelta a Burgos – the first major international men's race since March – as opinions were split in the peloton over Israel Start-Up Nation's decision to remove two riders due to coronavirus concerns.

While Deceuninck-QuickStep's Yves Lampaert was among those to praise the team for what he saw as clear and decisive action, others felt the team did not go far enough.

According to the Het Laatste Nieuws, the Movistar team felt Israel Start-Up Nation should have withdrawn from the race entirely, and made their feelings known to Israel's Spanish sports director, Oscar Guerrero.

Israel Start-Up Nation refused, insisting they had erred on the side of caution after it emerged that Itamar Einhorn had recently come into contact with teammate Omer Goldstein, who was positive for COVID-19. On the eve of the race, they announced Einhorn would not take part, but on the morning of the opening stage, on Tuesday, Alex Dowsett was also pulled as the team turned up with just five riders.

Einhorn and Dowsett, along with a number of staff members who'd also come into contact with Einhorn, were tested on Monday but the results did not return ahead of the start of the race. Later in the day, they all came back negative.

Movistar were reportedly "not subtle" in their pleas to Israel Start-Up Nation, with Guerrero asked to convince his riders not to take to the start.

"Maybe they reacted that way because they are afraid of Ben," Tom Van Asbroeck said, referring to the team's leader, Ben Hermans.

"I think our team has handled this very correctly and fairly, thereby avoiding possible incidents. I spoke to several riders during the race - including one from Movistar - and no one asked a question about corona."

Indeed, while Movistar were unhappy, there were some who praised Israel Start-Up Nation's decision to remove what they described as two "perfectly healthy" riders.

"It's great that they do it this way and don't try to hide things," Lampaert told Het Laatste Nieuws. "I think they did well by quarantining their riders right away. Every team has to react that way."