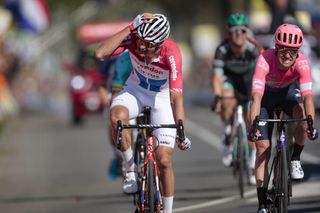 Organisers of Amstel Gold Race have been forced to cancel this year's race due to the coronavirus pandemic, race director Leo van Vliet announced on Wednesday. All of the races in Belgium through April 30 have also been cancelled or postponed to stop the spread of the potentially fatal Covid-19 disease caused by the new virus, SARS-CoV-2.

"The safety and health of the riders, our visitors and everyone who works during the Amstel Gold Race weekend is always paramount," Van Vliet said, according to Sporza.be.

The cancellation follows the painful news of all major races through the Giro d'Italia falling victim to the preventative measures which include 'social distancing' to keep the virus from spreading quickly.

Coronavirus: Lappartient says Monuments and shortened Giro d'Italia could be held in Autumn

On Tuesday, ASO announced it would not organise Paris-Roubaix, Liège-Bastogne-Liège or La Flèche Wallonne, while Flanders Classics could not hold the Tour of Flanders. Scheldeprijs and Brabantse Pijl were added to the list of events taken off the calendar for the time being after the Belgian federation decreed a top to all races through April 30.

"As a result of the decision of the UCI and the additional measures taken by the National Security Council, Belgian Cycling, Cycling Vlaanderen and FCWB decided to extend the decisions already taken earlier and to include all cycling races in Belgium on the international, national and regional calendar for all categories and to be canceled until April 30 for all cycling disciplines ", the Belgian cycling announced.

The Netherlands has yet to require similar sweeping action but Van Vliet said, "We are following the advice of the health and safety authorities and the Amstel Gold Race is coming too early to guarantee that it will be a carefree edition."

"Of course this is a difficult decision to make and we are very sorry. The organization of the Amstel Gold Race has been working towards this great event for a whole year and we understand that it is disappointing for all participants, whether they are pros or touring cyclists. But we cannot help but make this choice."

It is not yet clear whether the races will be rescheduled, but the Belgian Federation said it will process requests to reschedule.

"It will only be possible after the date for resumption of competition is known to grant new dates. We will continue to monitor this situation in close consultation with the competent federal government, and will adjust the measures if necessary as the situation evolves."