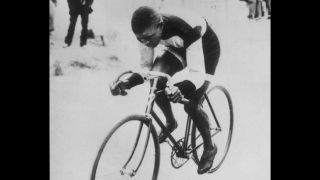 As part of our 'eBay finds' series, we've scoured the web to find the best deals and most interesting items for sale from around the cycling world. Today's find, however, doesn't come from eBay at all. Instead, we've been to Amazon and found an autobiography of Major Taylor, our sport's first black world champion.

Buy Major Taylor: The Fastest Rider in the World on Amazon.co.uk

Buy Major Taylor: The Fastest Rider in the World on Amazon.com

Marshall Walter 'Major' Taylor raced on tracks around the world between 1896 and 1910, winning races and setting world records in the USA and Europe.

Only the second black athlete to become a world champion in any sport (after Canadian boxer George Dixon), Taylor triumphed in the men's sprint event at the 1899 Worlds in Montréal.

During his glittering racing career, Taylor set numerous world records on the track, over distances from 1/5 mile up to 2 miles. He frequently raced in front of crowds of thousands and made $35,000 – an astronomical sum for the time – during his 1903 world tour, which saw him win 40 out of 57 races during his time in Europe.

While Taylor has gone down in legend in part due to his countless wins, vast talent, and speed, his legacy lies in his fight against the overt racism and prejudice in the almost completely white professional ranks.

Taylor was persecuted by restaurants, hotels and race organisers, especially in the southern USA, while fellow competitors sometimes refused to race him and abused him verbally and physically, too.

He detailed incidents such as these in his autobiography, adding them in order to serve as inspiration for black athletes facing similar treatment. Taylor blazed a trail for challenging segregation and racism in sports, and his actions still serve as inspiration today, where systemic racism and police brutality has seen protests sweep the USA and Europe.

Today, tributes to Major Taylor stand in Indianapolis, and in his adopted hometown of Worcester, Massachusetts. He was posthumously inducted into the Hall of Fame of both USA Cycling and the UCI, while the Major Taylor Velodrome stands in Indianapolis.

Buy Major Taylor: The Fastest Rider in the World on Amazon.co.uk

Buy Major Taylor: The Fastest Rider in the World on Amazon.com