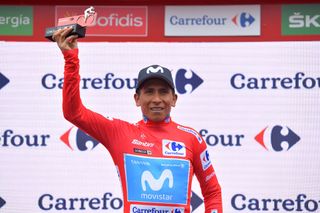 It has finally been confirmed that Vuelta a España leader Nairo Quintana will be leaving Movistar and joining Arkea-Samsic in 2020, signing for the French Pro Continental team on a three-year contract.

Quintana's brother, Dayer, will also join, along with Winner Anacona, a fellow Colombian and key ally at Movistar, and Diego Rosa, who has ridden for Team Ineos for the past two years.

The announcement came just a few hours after Quintana had officially confirmed one of cycling’s worst-kept secrets: that he will be leaving Movistar, his team since 2012, at the end of the season.

Quintana’s move to Arkea-Samsic represents a major boost to the French squad’s aspirations in the Grand Tours,  with the Tour de France high on their agenda in 2020. Quintana won a stage of the Tour de France this year in the Alps but turned in an uneven GC performance, finishing eighth.

The confirmation of Quintana’s arrival at Arkea-Samsic lays to rest months of speculation about his future destination. UAE Team Emirates had briefly been mentioned in the Colombian media as a possibility, but Arkea-Samsic were always thought to be his first choice.

"Arkea-Samsic are progressing year by year. I've followed their development, I took an interest in their project and, above all, I like their outlook," Quintana said.

"I think it's a squad where human values are very important - central, even. I was looking for a team in which I was going to be happy. I think that's the key to flourishing professionally."

Quintana has won both the Giro d'Italia and Vuelta a España, but has been unable to win the Tour de France, despite three podium placings in Paris. He has dubbed his ambition to win the Tour 'The Yellow Dream', and insisted that it will carry over to his new team.

He assumes leadership status alongside Warren Barguil, who, as a multiple Tour de France stage winner and native of the Brittany region that is at the heart of the team's identity, was a marquee signing two years ago.

"My ambitions stay the same. Personally and collectively, the objective is to fight to win the Tour de France. It's a turning point in my career, but I'm convinced it's a positive one. I'll have to get used to certain things, and pick up some French but most of all I want to continue doing what I love. When I'm on my bike, I'm happy and at ease. Together we're going to do what we know best with the Arkea-Samsic jersey," Quintana said.

"The group in place is interesting. I already know Warren as we've done the same races since the youth categories. The management made the choice to recruit riders I'm close to and for me it's very important to have Dayer, Winner, and Diego with me. They're my family. It's like that in our culture; we're supported by those close to us and we want to shine for our country. I don't yet know the Breton culture very well but I've been told there are some similarities. We'll find out from this winter. We're coming to Brittany to give everything we have: our legs and hearts."

Arkea-Samsic manager Emmanuel Hubert spoke of his pride at welcoming a rider of Quintana's stature.

The team have their roots in the amateur squad set up by Jean Floc’h in 2005 and have competed since 2005 in the Professional Continental ranks, or the second tier of professional cycling. In 2014 they rode their first Tour de France and in 2018 their budget grew and they signed Warren Barguil, who'd just won two stages and the polka-dot jersey at the Tour de France, on a three-year deal. They added to that with the signing of 11-time Tour de France stage winner Andre Greipel for 2019, and have voiced their ambition to gain WorldTour status in the near future.

The arrival of Quintana, a multiple Grand Tour and WorldTour-level stage race winner and a three-time podium finisher at the Tour de France, is a big statement of intent.

"On paper, our 2020 squad, made up of 28 riders, will have nothing to envy of the best WorldTour teams. We’re giving ourselves three seasons to bring the project to fruition with a Grand Tour victory," said Hubert.

“My objective is to construct one of the best teams in the world. That will demand rigour and professionalism at every level. We’re no longer a ‘small’ family team, but we’ll continue to place the person at the heart of our project. I hope all my riders and all my colleagues are invested in the project, and the success will be collective.”

Hubert addressed the issue of Warren Barguil, and where Quintana's arrival leaves the Frenchman, who was signed in 2018 as the team's leader and talisman. Barguil has struggled to replicate the Tour de France success that preceded his transfer, and considered quitting cycling, but came back to life this summer by becoming French champion and finishing 10th at the Tour de France.

Hubert insisted Barguil will enjoy equal footing with Quintana in the leadership stakes, and that the Frenchman will ride for the general classification at Grand Tours, rather than just stage wins.

"The alliance between Nairo Quintana and Warren Barguil must be an added force for them both. They must serve one another in order to progress," Hubert said.

"Nairo Quintana has won the Giro d’Italia and Vuelta a España and has three Tour de France podiums on his palmarès. I’m equally convinced Warren has the capacity to shine on GC and it’s down this path that we want to lead him.

"We hope to form a solid group of climbers around our two leaders. I think the bonds formed at training camps contribute to the strength of the team in competition. To consolidate those bonds, we’re planning a training camp in the south of France."

Hubert also hinted at another new signing. Greipel still has another year on his contract and is expected to see it through but Arkea have been heavily linked with Nacer Bouhanni, who will leave Cofidis at the end of 2019.

"Supported by two great sponsors in Arkea and Samsic, we want to compete on all terrain, which also means strengthening in the sprinting department," said Hubert. "An announcement will be made in mid-September."

Quintana’s announcement of his exit from Movistar comes just a few weeks after Mikel Landa also said he was leaving the team, for Bahrain-Merida.

“It’s time for this marriage to break up,” Quintana told reporters on Monday during Movistar's Vuelta rest day press conference.

Quintana has finished on the Tour de France podium three times and won both Giro d’Italia and Vuelta a España with Movistar. However, after what he called “my best period in cycling” with the Spanish team, he has said he’ll be moving on.

A future return to Movistar further down the line is possible, the 29-year-old suggested, but he said: "This marriage has to break up for now at least. I don’t know if I’ll come back or not, but for the moment, it’s time to go.”

Quintana concluded that segment of the press conference by thanking Movistar’s back-up staff and teammates, before going on to discuss his chances of taking a third Grand Tour for the team before he leaves.

“I can win it, it’s possible,” Quintana, currently six seconds ahead of Primoz Rolgic (Jumbo-Visma) said. “We know that tomorrow [stage 10 time trial - ed] is very important. Although we’ve got the red jersey, Roglic is practiacally the race leader given the time he’ll take on us in tomorrow’s stage. I’m going to go all out and that’s all I can do.”

As for how the time trial may affect Movistar's Vuelta leadership conundrum, regarding himself and Valverde, Quintana said: “What’s most at stake is the team, and whoever’s going better will help the other one. It all depends on who’s strongest.”

Quintana concluded by saying, though, that he was feeling better every day. Going on his performance in Andorra, his form certainly appears to be heading in the right direction. How his improving condition will affect his performance in Tuesday’s time trial, and how much time he loses to Roglic, could well be one of the most crucial  questions of this year’s Vuelta.