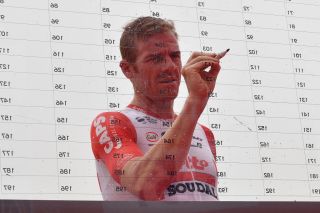 Lotto Soudal stalwart Adam Hansen has vowed he will race in 2021 after missing months of competition this season due to the coronavirus pandemic.

The 39-year-old is off-contract and competed at the Tour Down Under, the Race Torquay, the Cadel Evans Great Ocean Road Race and the UAE Tour before the calendar was suspended in March due to the global health crisis.

Hansen said it was always his intention to continue racing next year but the consequences of the pandemic have heightened that resolve.

"I'll race next year," he told Cyclingnews without hesitation.

"I don't have a contract next year, but I will. Especially with this year, it would be nice to definitely have one more year. I feel cheated."

Hansen has been part of Lotto Soudal for almost a decade and recently helped staff communicate to riders two pay-cuts the team has been forced to implement in the current climate.

"I had no problem accepting this [pay-cuts] because I understand the economy and the impact. I think we're very fortunate that a lot of the sponsors are still paying, and we get to stay home and we're still training, but I know we're not representing them as much as we could. I think we cyclists are the last people to complain when you compare it to all the other people out there," Hansen said.

The two-time Grand Tour stage winner is sceptical about whether this season will be completed in its modified entirety, referencing the threat of a second COVID-19 wave and worldwide government-mandated restrictions still in place.

"I'm meant to say it's going to run, and keep our sponsors happy and everything. I do think the racing will start. But then I think there might be a second wave and then maybe the second part might be cancelled," Hansen speculated.

The Australian, who has lived in the Czech Republic for 15 years, has good reason to be dubious having been tested for the coronavirus three times this year. He was one of about 600 UAE Tour participants who were placed into lockdown and tested before being allowed to leave Abu Dhabi in February. Hansen made his originally scheduled flight home from the race, following some general travel confusion, and became ill shortly afterwards.

"I wanted to come directly to Czech; that was my number-one priority," Hansen said.

"I actually entered on my Australian passport because I have an Italian passport, too, but I didn't want to show that at all," he laughed, "because that's when Italy was having it bad.

"I flew into Krakow in Poland and then I just drove across the border, and then I got really sick. I had a fever, and then I had a lady from Poland call me to say that I was in contact with someone with coronavirus. Someone on my flight had coronavirus.

"She said I had to self-quarantine. I called the hygiene place in Czech, I got tested again, directly, and I was negative."

Hansen became more mobile when he started to feel better, but soon after deteriorated again.

"I went to the doctor and he didn't know I had been tested two times before. He thought I had it, so he sent me home," he said.

"At that time, I think we had eight positives in Czech and they were all from Italy on ski holidays. There was actually a Wikipedia page and they were showing everyone that was positive, and I was just waiting for my name to be there because I was getting tested so much. I kept hitting refresh. Everyone was traceable.

"They came and tested me again [at home]," Hansen continued. "It wasn't so nice being tested here because I live right next to the mountain rescue centre... and there is also an ambulance centre. When they came to test me, it was an ambulance that came but not from them – from a different hospital, and it looked really strange: an ambulance parked in my driveway for at least 40 minutes that the test took.

"What they did is they drove in, came out, did full dress so everyone on the street could see; they put all the gear on. They were really cautious... They had, like, the full suit, and even when they had gloves over their uniform, they put tape over the gloves and uniform – they taped everything up," Hansen explained.

"She [medical officer] came in, she tested me, then she went outside and then the guy disinfected her with the spray – fully sprayed her. He put his stopwatch on and waited three minutes until the disinfectant killed everything on her, and then she took all her [protective] clothes off onto a plastic blanket on the garden and they packed it all up.

"There were no positives on this side of the country and I just thought if I'd be the first one... When they did that twice, it was, like, 'Oh, this is not good. I don't want to be known as the guy that infected the Czech Republic!'"

Hansen returned negative results for all three coronavirus tests: his illness was considered "just a fever".

Hansen said the Czech Republic was quick to enforce lockdown protocols. He was required to wear, and train in, a face mask for a stint, but unlike other WorldTour riders across the continent, he wasn't confined to his home and the indoor trainer.

"Maybe a day later, when Italy went on lockdown, we went directly afterwards and then Slovakia followed. The other countries were a week or two weeks after us. It was crazy," he recalled.

"We were super lucky we went so early into lockdown. I was always allowed to train outside, shops were always open, the hardware stores were only closed for, I think, one week... It's actually been really good. I think I'm one of the luckiest cyclists because I have mountains here, I can train outside, and the other countries where you can train outside, like Belgium, they don't have real high mountains."

Hansen observed a modified training programme while the UCI and industry stakeholders worked on a revised calendar. Since 2012, he has been in Italy at this time of year, competing at the Giro d'Italia, but not now.

"I knew directly it was going to be a long time of not racing and I was thinking, 'What's the point of hammering yourself?' I was seeing guys in Belgium still doing 250km rides and thought, 'We won't be racing for at least two or three months,'" he said.

"I've stayed healthy and trained every second or third day on the bike, and then done a lot of core work. Even so, it's three months away until we race. It's a long time."

Since the announcement of the rejigged UCI calendar, Lotto Soudal has asked its riders to submit their race-programme preferences.

"They don't want to do a training camp. They want us to be isolated for as long as possible. They've given us the race programme, which we've all seen, and they've asked us to pick an A and B programme that we want," Hansen said.

Team staff were due to call riders individually last week to discuss schedules.

Hansen is somewhat of an anomaly in the WorldTour as his life doesn't solely revolve around cycling and he has other guises outside of being a professional athlete. The Giro and Vuelta a España stage winner has been working with Leomo, maintains a property investment portfolio and, with a background in computer science, manages other entrepreneurial pursuits including his Hanseeno range, all which have helped him maintain order in a time of chaos.

"I've been flat out. I don't want to say it but I'm loving this lockdown," he laughed. "No, really. I've always said if I was a superhero and I could have one superpower, it would be to pause time and just catch up on stuff, and this is what it is. The world has stopped, and I can just do what I want.

"I'm actually enjoying it. I've been super busy and productive building stuff and fixing stuff around the house. I still feel like a cyclist; it's not like I've disappeared or anything," Hansen added.

"I look forward to racing. I've always loved training more than racing. And I'm allowed to train outside; I've never had a problem with it. Mentally, we have these team calls, and I can see some riders are really struggling, whereas I'm really taking the opportunity to do other things and enjoying it a lot.

"I'm trying to take advantage of everything so that when the season does start, I can just focus on cycling."