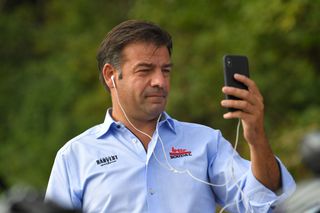 Lotto Soudal general manager John Lelangue has spoken further to the Belgian media about the men's WorldTour team's recent decision to make 25 of its staff members temporarily unemployed during the ongoing coronavirus crisis, while the team's riders, management staff and administrative staff have taken temporary pay-cuts.

According to HLN.be, Lelangue told VTM News at the weekend that the situation was unlikely to change over the next couple of months, but that due to what is a "special situation", giving up part of their wages was a "good signal" from the riders to the rest of the team, its sponsors and fans.

"We are now in a situation where there is no more work for them," Lelangue said of those members of staff who will be temporarily unemployed and rely on benefits provided by the Belgian government to bridge the gap until racing begins again.

"We know that we won't be racing in the next two months, and maybe not in June," he said. "We naturally hope that we can race again soon, but it's clear that we have to adapt to the situation. That's why we have chosen to put those 25 people on technical unemployment.

"It's a special situation for every sector," continued Lelangue, "and I think it's a good signal from the riders and management. We also realise that our sponsors are having difficulties these days because of the crisis, and they're also taking measures. Of course, the riders will continue to train until the season resumes, but they're making an effort to show solidarity with our colleagues and sponsors."

While an exact date for the resumption of racing remains impossible to predict, many hope that the Tour de France may still be able to go ahead, either during its planned dates from June 27-July 19 – but potentially without any roadside fans or starts and finishes accessible to the public – or at a later date this summer.

"I hope we can go to the Tour," said Lelangue. "But will that be in the same time slot, or a little later now that the Olympics have been postponed? The UCI has decided to run the road season through November 1, so if we can start over in June, we have a few months to maybe include a few Monuments [cycling's five biggest one-day races] back in the calendar. That way, we can try to finish the job and get some great results. But we're not making any plans for the time being."