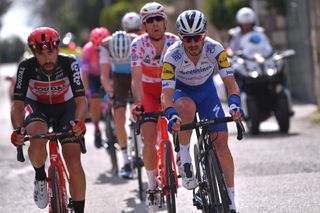 Belgium's two WorldTour teams, Deceuninck-QuickStep and Lotto Soudal, could see their budgets reduced by potential cutbacks from their major sponsors as the coronavirus crisis continues, according to reports in the Belgian press.

The lack of any racing during the sport's current shutdown has now prompted some serious conversations between team managers and their teams' sponsors.

Lotto Soudal are one of a number of teams – along with CCC Team, Astana, Bahrain McLaren and Mitchelton-Scott – that have already reduced their riders', and in most cases members of staff's, salaries.

Deceuninck-QuickStep's main sponsor has now told Belgian newspaper Het Nieuwsblad that it is talking to team manager Patrick Lefevere about reducing its contribution.

"Especially now that we're in our second season [as sponsor], we wanted to reap the benefits of our sponsorship," Deceuninck CEO Francis Van Eeckhout told nieuwsblad.be on Tuesday. "That's not possible now.

"But we know how many riders, sports directors, carers and drivers are employed by the team," he added, "and we're not going to pull the plug."

Experienced team boss Lefevere has always been realistic about the difficulties of finding the budget to run one of the world's biggest and best teams, but also defended his squad's current situation.

"Last year, they [team sponsors] were of course spoiled," he said of Deceuninck-QuickStep's 68 race victories. "Now, we're not winning as much, but you can't say that we haven't been offering exposure.

"We actually have more media visibility than last year, and last weekend more than 600,000 people watched the 'virtual Tour of Flanders'," he added, in which Deceuninck-QuickStep riders Remco Evenepoel, Yves Lampaert and Zdenek Stybar took part.

"But I also want to wait until April 20 to get a global picture," Lefevere said, having asked Deceuninck to revisit the budget situation then, according to Het Nieuwsblad.

The newspaper also spoke to Lotto Soudal's two main sponsors, where it was a similar picture.

"Our contribution will remain unchanged for the time being, with the emphasis on that being provisional," Joke Vermoere, spokesperson for the Belgian national lottery, Lotto, said, adding that the outcome of Tour de France organiser ASO's May 15 deadline to decide when the Tour will take place will be key.

"Then there might be an adjustment of our sponsor budget," Vermoere said.

"We won't drop the team, but it makes sense that certain things need to be arranged," co-sponsor Soudal's PR manager Marko Heijl said. "We have daily contact [with the team], and this situation will bring repercussions to the team's sponsorship budget."