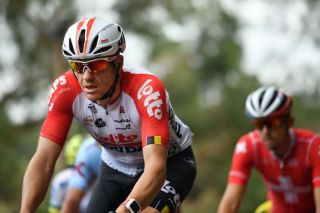 Lotto Soudal's Adam Hansen at the 2019 Tour Down Under (Image credit: Getty Images)

Adam Hansen's (Lotto Soudal) appearance on the start line at the 2019 Tour of Guangxi marks his third participation in a row at the fledgling WorldTour closer. But, perhaps surprisingly, it's also his first race since June.

Adam Hansen: The five races that changed my life

The Tour de Suisse was the last time the iron-man Australian turned a pedal in anger – a seeming far cry from his days of completing Grand Tour after Grand Tour between 2011 and 2018, with him completing 20 in a row.

Thursday's opening stage – a circuit race in the coastal city of Beihai, in China – marks Hansen's return to racing after his four-month lay-off. The UCI's rules are perhaps the primary reason, with riders limited to a set number of race days on the WorldTour and Continental circuits during the season.

"I was meant to do Hamburg [in August], but I sprained my ankle before then, so I've lost a month there," Hansen said before the start of stage 1.

From the Tour Down Under to Switzerland, the 39-year-old put in near-enough two calendar months of racing before taking time off.

Highlights along the way have included helping teammate Caleb Ewan sprint to stage victories at the UAE Tour and the Giro d'Italia (twice), and Hansen's service has seen him recently agree a new contract with the Belgian squad.

"Yeah, it's been nine years with the team. Next year will be 10. It's good. I should get some sort of retirement plan going. A long service type of thing," he joked.

"I guess time flies when you're having fun," he added in a team press release on the extension, saying that he'd like to race the Giro d'Italia and maybe the Tour de France next season.

New additions to Lotto Soudal in 2020 will include Classics stars Philippe Gilbert and John Degenkolb, from Deceuninck-QuickStep and Trek-Segafredo, respectively. The two will bolster the spring hopes of a team losing Tiesj Benoot, and which hasn't succeeded at the Tour of Flanders or Paris-Roubaix since 2003.

"For sure, we're excited," Hansen said. "Those two definitely look like super signings. They'll help us in the spring, especially for the Flemish classics. Gilbert and Degenkolb can do really well there and fill those holes, and just make the team that bit better."

But back in the present, and the team are racing in support of Norwegian revelation Carl Frederik Hagen, a new addition to the WorldTour this year, who finished eighth overall at the Vuelta a España, his Grand Tour debut.

"We'll probably ride for Carl when it comes to the GC. He's riding really well," said Hansen. "Also, Victor Campenaerts is riding well, so they're the two leaders for the GC here. We've got nobody for the sprints, so we'll get a rest there.

"I haven't raced for four months, so I'll take it easy for the first few stages and see how I go. I'd like to go on the attack, but I just want to see how things go," he said.