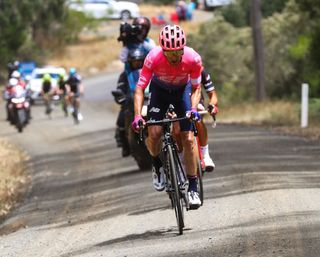 EF Education First's Michael Woods on the attack on the gravel section on stage 2 of the 2019 Herald Sun Tour (Image credit: Con Chronis)

The route of the 2020 Herald Sun Tour, which gets under way in Nagambie, Victoria, on February 5, will include both Falls Creek and Mount Buller, with the two iconic climbs featuring in the Australian stage race together for the first time.

As a result, race director Scott McGrory says that he expects the 2020 edition of the five-day men's race to be won by a "pure climber", with the last rider to have won that fits that description being Esteban Chaves of Mitchelton-Scott, who took the title two years ago.

Indeed, the riders face a very different route to the 2019 edition, which was based mainly around the Mornington Peninsula and the Gippsland region, south-east of Melbourne, with the climb of Arthurs Seat deciding the race on the penultimate day, with Team Sky's Dylan van Baarle coming away as the overall winner.

Next year's race, however, takes the peloton back into Victoria's true mountains, and fans will be happy to see the re-inclusion of both Falls Creek and Mount Buller.

The opening stage of the men's race on February 5 takes the riders from Nagambie – two hours north of Melbourne – to Shepparton, along what is a mainly downhill route of 122km that should end in a sprint, and give the fast men what will perhaps be their only opportunity to wear the yellow leader's jersey at next year's race.

As soon as stage 2, the climbers will come to the fore for the final 30km of the 118km stage from Beechworth to the Falls Creek ski resort at 1,535m, on a stage with 2,600m of elevation gain. The final climb may average only 4%, but it has short sections that top 10%, and it's long for what will be an early-season climb for the European-based pros.

Stage 3 from Bright to Wangaratta can perhaps be described as a mixture of the two opening stages, with the difficult Tawonga Gap climb out of Bright providing an opportunity for a strong group to make an early move. They'll be hard-pushed to stay away, however, with the undulations of the first half of the 178km stage giving way to a flat run-in to the finish, where the sprinters' teams will be looking to organise themselves and take victory, even though the overall race lead is likely to stay with whoever conquered the previous day's stage to Falls Creek.

Stage 4 will be the race's 'queen stage', where the race's best climbers will be looking to underline their strength on the climbs, with a second summit finish in three days. Two early 50km laps from the start in Mansfield include two ascents of the stiff climb up to Tolmie, and a fast descent each time down the even steeper Old Tolmie Road.

The real sting the tail, however, is Mount Buller, which comes after the stage heads east following the second lap, providing 15km of climbing at an average of 6%, but with sections of up to 13%, which will surely serve to crown the 2020 Herald Sun Tour champion.

The race will finish the next day, on February 9, with what has now become its traditional finish on a sprinter-friendly course around Melbourne's Royal Botanic Gardens, albeit with multiple ascents of the short, sharp Anderson Street to contend with, which is very much known to Melbourne-based fans.

"It's fantastic to have two of Victoria's most iconic mountains in the same race," race director McGrory told the Herald Sun newspaper on Friday.

"Buller used to be in the race almost religiously, but it's been a while since we've been back there.

"It will be a race won by a pure climber, but there are plenty of opportunities for the other riders, that's for sure," he said.

The Women's Herald Sun Tour also returns in 2020, again as a two-day race, with a sprinter-friendly opening stage on February 5 over a 100km stage based around Shepparton.

That's followed by what will be a decisive 80km second stage, with an out-and-back route that starts with a descent of Falls Creek and heads north-west down to Tawonga, where the riders turn and head back uphill for 10km before starting the 30km climb back up Mount Buller.

Last year's winner, Lucy Kennedy (Mitchelton-Scott), is likely to return to try to defend her title, and would surely fancy her chances on the tough second day of climbing.