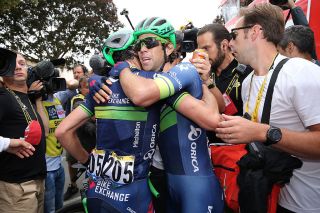 Two months ago, the notion of Michael Matthews returning to Mitchelton-Scott was unthinkable.

The future of the Australian WorldTour team looked uncertain due to financial pressures and the failed takeover talks with the Manuela Foundation lead to a senior management change. Rider budgets were already being squeezed with substantial pay cuts enforced during the COVID-19 lockdown. With the pressure of trying to keep both Yates brothers, the team were on the lookout for modest additions to their roster rather than star quality.

At the same time, Matthews had a deal in place with Team Sunweb for 2021, and while there were hints of division within the ranks, a return to the team he spent four years with between 2013 and 2016, looked out of the question.

But a lot can happen when you leave your highest-paid rider out of the Tour de France and fail to provide a solid explanation as to why.

Still, that didn’t necessarily mean a move away from Sunweb and to Mitchelton was possible. It could only have happened if Matthews had managed to wiggle his way out of his Sunweb contract and if Mitchelton could free up funds to afford a rider they'd lost four years ago.

The turning point came when Adam Yates informed Mitchelton-Scott of his desire to leave for Ineos, and when – almost by chance – Mitchelton were made aware that Matthews might be available.

Until that point, the Mitchelton management had offered Adam Yates a contract extension for the next two years, just as they had done with his twin brother Simon. However the lure of more money and a change of scene had turned Adam’s head.

Suddenly, Mitchelton had a hole in their roster to fill. Jack Haig had already signed for Bahrain McLaren, so trying to improve his terms was a waste of time, and with Mikel Nieve and Esteban Chaves already tied down for another 12 months, the rest of the team’s big hitters were already budgeted for.

The market offered little when it came to big-name leaders, and Mitchelton had been busy securing their own short-term future when Maximilian Schachmann – a rider they briefly looked at – opted to stay at Bora-Hansgrohe.

If Mitchelton were going to make a move in the transfer market for a team leader, it had to be the right kind of rider and the sort of talent that would instantly fit into their culture.

In that sense, Matthews was perfect. Between 2013 and 2016 he was one of their team leaders and his palmares was ever-expanding as he picked up a number of impressive wins, including a Tour de France stage into Revel in 2016.

However, during that period his relationship with Simon Gerrans had deteriorated to the point of no return, forcing the separation.

The two are very different characters, with very different ways of doing things, but because they both targeted similar races, a clash of personalities was always on the cards. It famously came to the surface when the pair raced together for Australia in 2015 at the Richmond World Championships and Matthews told Cyclingnews that he and Gerrans had raced against each other in the final sprint. Matthews would take silver behind Peter Sagan, but the damage was done and laid bare for all to see.

Gerrans had a contract with the team going into 2017, and with Sunweb throwing suitcases of cash, and more importantly the possibility of sole leadership in sprints and one-day races, Matthews jumped at the chance to leave. The move was already close to completion by June of that year.

The transfer was far from a failure for the Australian, who won the green jersey and two stages in the Tour the following year, before picking up both Canadian WorldTour races a year later. He cemented his place as one of the best riders in the world.

However, Sunweb’s decision to leave Matthews out of their Tour de France roster and the rescheduled spring classics was perplexing. Not only is Matthews the team’s most high-profile rider, so many of this year’s Tour de France stages look ideally suited to his characteristics.

The form was there too, with the 29-year-old finishing third in Milan-San Remo with just one functioning hand after scraping the wall of the Poggio, followed by a superb win in last week’s Bretagne Classic.

If one also considers that the Giro d’Italia and so many other races that stretch into late September and October are at risk of cancellation due to concerns of the COVID-19 pandemic, then it’s not impossible to envisage a scenario in which all of Matthews’s race targets are wiped out.

Sunweb are far from a poor team - they’ve won eight times this year and may well have a successful Tour de France - but their decisions at times look bizarre.

Once Matthews was able to follow the likes of Marcel Kittel, Tom Dumoulin and Warren Barguil in extricating himself from his Sunweb contract, only one destination felt appropriate.

Selling the idea to Gerry Ryan was the easy part for the Mitchelton management, and the team’s hierarchy even looked at modeling a scenario in which both Yates brothers stayed and Matthews came on board. But at the start of August, when the team found out that Matthews might potentially be interested in coming back, and that Adam Yates was probably going to leave, it didn’t take a huge amount of time for the deal to be dragged over the line.

The recapturing of Matthews works on a number of levels. He has a close relationship with Ryan, which is obviously important, but his nationality comes secondary to the fact that Matthews can easily buy into the team’s culture. He understands what the team are about, and it should be remembered that he left amicably in 2016. In fact, he was still winning races for the team, even after he signed with Sunweb around the time of that year’s Dauphiné.

He comes back to Mitchelton a more complete rider and one with greater experience, patience and knowledge. At the same time, he’s hungry to win and, with Mitchelton’s backing, the best is surely yet to come.

Going forward, the team retain their dynamic stage-racing caliber with Simon Yates, Chaves, Nieve and the promising Hamilton, while Matthews adds freshness to their one-day core. Unlike a pure sprinter, as they experienced with Caleb Ewan, Matthews doesn’t require a dedicated lead-out train, and his climbing talents mean he can fend for himself and dovetail as a helper if and when his services are required.

Matthews' move to Mitchelton came down to timing, and an element of luck, but it already looks like one of the best transfers of the summer.