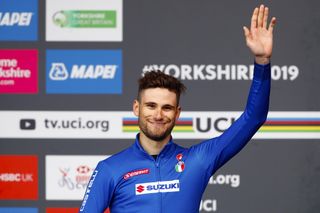 Fillipo Ganna (Team Ineos) is out of contract at the end of the year (Image credit: Bettini Photo)

Last week we highlighted the ten biggest names on the transfer market but just below the likes of Chris Froome and Thibaut Pinot are some real gems. For our second round of Transfer Mechanics, we’ve focused  - with the assistance of data from Fuoriclasse - on ten riders under the age of 25. They’re all out of contract at the end of the season and we've picked a selection of climbers, sprinters, and GC candidates.

Marc Madiot only has nine riders under contract for 2021 and while that provides the Frenchman with a degree of flexibility it also creates several dilemmas. Team leaders Thibaut Pinot and Arnaud Demare are both able to leave – although that’s unlikely – while a raft of other promising squad members will also attract the attention of rivals teams. One such rider is Gaudu, who has developed at a promising rate since winning the Tour de l’Avenir in 2016. His victory tally may be sparse at this point but over the coming years Pinot’s training partner should continue to make incremental steps as he assumes greater levels of leadership and responsibility. In 2019 he finished second in the white jersey competition at the Tour, won a stage in the Tour de Romandie, and then capped the year with a handful of one-day results. He hasn’t exploded onto the scene like Bernal or Pogacar but he’s an asset that Madiot will be eager to re-sign. At the same time, Gaudu is unlikely to seek a move. After all, Pinot is the perfect shield when it comes to pressure, and at 23, the softly spoken climber has time and a manager who holds immense faith in his skills.

Trek Segafredo have often come across as being somewhat hesitant when it comes to their sprint department. In the past, they've hired riders with a turn of speed, such as Degenkolb and Nizzolo but their positions often felt like token moves as the team looked to cover several bases at once. With Moschetti the team has a genuine chance of developing a class act and his early-season form suggested that the Italian had made significant strides. However, a serious injury has derailed his year and even if racing does resume in the autumn the 23-year-old will be expected to hit the ground running. A contract extension, therefore, will come down to how much belief the team has in the rider regaining his full fitness and whether another team is willing to take a chance on a sprinter who may be available at a lower price due to his injuries.

The fact that the Tokyo Olympics have been pushed back by a year only helps a rider like Ganna, who can use the next twelve months to improve his skill set and endurance against the clock. He’s already set several landmarks in his short but illustrious career and with Rohan Dennis in the Ineos camp the Italian at least as a rider he can learn some – but not all – of the tricks of being a high profile athlete. A focus on track pursuits will be embraced at the Ineos camp, while the former UAE Team Emirates rider will surely have the chance in another spring Classics campaign. Although he’s yet to start a Grand Tour, and competition for places at Ineos are often just out of reach for young riders, that’s unlikely to encourage Ganna to look around.

Talent doesn’t just evaporate but for whatever reason Ben O’Connor hasn’t quite kicked on after the promise he showed a couple of years ago when he was riding high in the Giro. He was on the cusp of a top-10 before a crash took him out. A fair amount of the responsibility for a lack of progress  - in terms of results - can be associated with the highly dysfunctional nature of the Dimension Data team at the time, which reached peak levels of ridiculousness at last year’s Tour de France. It’s probably no surprise that since the team brought in Bjarne Riis and Michael Rogers the organisation has stabilized and started winning. And as a results O'Connor notched up an impressive win earlier this year.

The problem for Riis, however, is that a dicey sponsorship situation has only become worse in recent months and at the end of the year, even if the team survives, he will have to rebuild from almost scratch. There are only a handful of NTT riders with contracts for next year, meaning that should Riis secure the needed funds he’ll still be in a race against time to keep all of his talent.  Some of those riders will slip through the net and some managers won't have forgotten O'Connor's pedigree.

The Spaniard turns 25 in November and has been something of a late bloomer in comparison to several riders on this list but his talents mark him out as one of the most versatile riders on our list. He can dig in during the blustery Classics; survive moderate climbs; work for his leaders when required; and has a wicked sprint at the end of tough, gritty races. He has qualities similar to Juan Antonio Flecha and Oscar Freire, and as a result, Bahrain Merida will face competition to keep him. The team’s management are already under pressure due to the financial strain of COVID-19 and with 15 of their roster out of contract this year there’s no way they can be expected to keep all of their assets. Dylan Teuns will almost certainly be offered an enhanced paycheck to keep his services, which should result in rivals teams attempting to pick off riders like Cortina.

The 22-year-old only won once in 2019, and that may have come after Caleb Ewan was disqualified in a stage of the Tour Down Under, but the Belgian nevertheless had a stellar opening season. He racked up 10 top-three finishes across a season that spanned from January to September and included a maiden Tour de France and a Classics campaign. Those podiums were often secured without fully dedicated leadouts, and while the former U23 Paris-Tours winner looks settled at UAE Team Emirates there will be interest from teams looking for a sprinter who could one day develop into a fully-fledged Classics specialist. UAE has a strong hand to offer Philipsen that includes freedom to develop, the chance to learn from a rider like Kristoff, and an ever-improving set-up and squad, but the former Hagens Berman rider will undoubtedly receive interest from Belgium and beyond.

The Ecuadorian arrived at the squad at the same time as Sosa and Ganna, and while those two have made obvious strides forward, Narvaez’ development has been somewhat more subtle. He made his Giro debut last year but was utilized as a domestique in almost every race he entered. That said, the 23-old-has settled into life under the Ineos banner and is considered a dependable pair of hands – or legs – when it comes to racing week-long events. He was used sparingly in one-day races last year, despite some fine results in that format back in 2018, and the COVID outbreak has robbed him of a vital second season in which he was surely on the cards for an increased role.

Just like you, we had to check if the Oomen was still under 25, and he is - just - but it certainly feels as though the climber has been around for far longer. A product of the Rabobank development project the 24-year-old saw his 2019 wrecked by surgery but with Tom Dumoulin jumping ship to Jumbo Visma his former sidekick was set for an enhanced role. That may still happen later this year but if the Sunweb management are truly determined to rebuild their stage racing portfolio then keeping Oomen  - and Kelderman – must be front and centre to their plans. Oomen’s top-ten in the 2018 Giro was proof of his ability and even if he’s not a Grand Tour winner in the making, he’s still an important piece for any team looking to build solid foundations in three-week races. If it helps, he's also one of the politest and well-mannered riders in the peloton.

While Oomen has room to breathe at Sunweb the same may not be true of De Plus and the situation at Jumbo Visma. After signing Dumoulin they’ve bolstered their stage racing core to the point where those a little further down the ladder might rightly question whether they’ll have opportunities to lead the team in the future. De Plus hasn’t had the chance to ride for himself over three weeks and his record shows why but he has several week-long stage results that suggest that the engine under the hood has the necessary capacity to make the next step. If Jumbo Visma offer new terms De Plus could be faced with a tough choice between working for two more years and hoping he has more of a leadership role in smaller races or dropping down to a smaller team and taking a risk. There’s no easy answer but plenty of teams would be lucky to have a rider of his caliber.

The former U23 world champion has been on Vincent Lavenu’s team since 2016 and in the last four years, the Frenchman has become a formidable rider on home soil. Most of his best results have come in French races, with Besseges added to his palmares earlier in the year. Lavenu has several team leaders out of contract this year, with Bardet, Naesen, and Latour all needing new deals. That might encourage other teams to chase Cosnefroy’s services but the chances of the rider leaving for pastures new are slim.